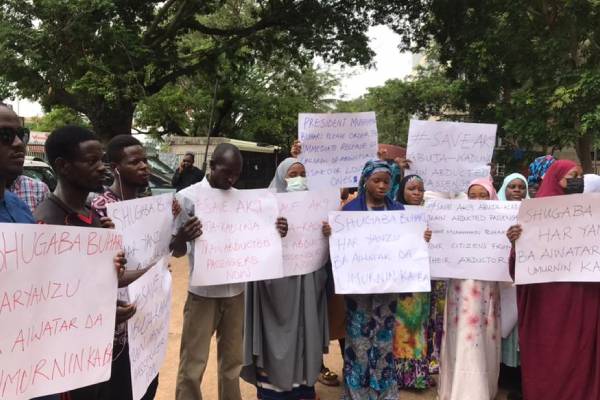 Terrorists who attacked the Kaduna-Abuja train and abducted passengers on the 28th of March have allegedly threatened to kill 61 hostages if the Government fails to meet their demands in the next seven days.

Some relatives of the victims who spoke with the bandits say they have demanded the immediate and unconditional release of eight of their children allegedly arrested in Nasarawa state but are now kept in an orphanage in Jimeta, Adamawa state.

The relatives on Wednesday morning held a peaceful protests in Kaduna, calling on President Muhammadu Buhari to rescue their loved ones.

They also shared a video of their loved ones in captivity allegedly sent to them by the terrorists.

In the said video the terrorists made their Victims call on the government to come to their rescue, among the victims is a foreign national from Pakistan.

The Terrorists had earlier in the week release a Statement to demand for the release of their Children and Other conditions for the abductees to regain freedom.

It will be exactly two months by the end of May since the attack on the Kaduna bound train and abduction of some passengers.

The abductors have now contacted the publisher of Desert Herald, Tukur Mamu to covey their message to the Federal Government.

In a series of telephone conversations with Mr. Mamu which has been published in the online platform of his newspaper the abductors started by stating that the Federal Government has contacted them on how to secure the release of the abducted passengers but there seem to be insincerity on the part of the government putting the lives of the passengers at risk.

“We don’t need money. We have a good reason for doing what we did until our demands are met none of the victims will come out alive even if it means we all die with them. They are well taken care of as you can see from the pictures we sent to you via WhatsApp but we assure you that this will not continue”.

The abductor demanded the release of their children taken from their wives in nasarawa state,

“The names of our children are; Abdulrahman, Bilkisu, Usman, Ibrahim and Juwairiyyah. They were forcefully taken from our wives in Nasarawa and taken to the orphanage in Yola”.

Presidency warns on Video of Murdered woman, Children in Anambra