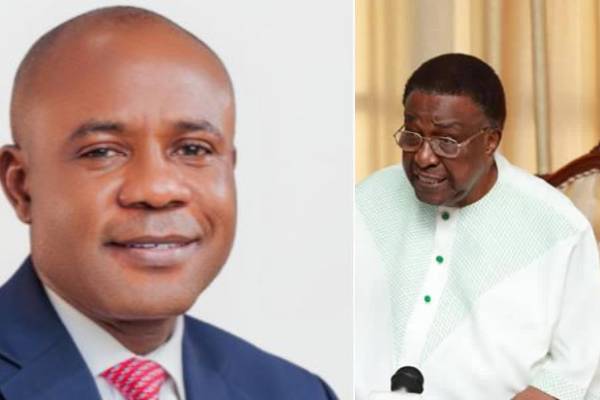 Former Governor of old Anambra State and Senator, Jim Ifeanyichukwu Nwobodo, has endorsed the candidature of Peter Mbah as the  governorship candidate of the PDP in Enugu State.

In his statement Senator Nwobodo described Peter Mbah as a quintessential technocrat with a calm disposition to cope with the rigours of governance.

Nwobodo who is easily the one of the oldest experienced politician of his era observed that Peter Mbah’s  candour and upwardly mobile experience fits the cap of a personality to galvanize the entities of the State and improve on the economic potentials of the State.

This came after months of speculations on who will take over from Governor Ugwuanyi in 2023.

But in less than 24 hours to the governorship primary election, Nwobodo has now revealed that Mbah is the chosen one.

He broke the news during a press conference at his Amaechi country home, where he also disclosed that another aspirant, Senator Ike Ekweremadu has accepted to support Mba.

He said he held a meeting with a number of the aspirants from Enugu East for a conversation on how to develop Enugu State.

“The former governor said, “I don’t usually call for this kind of press conference, but when something when something very important happens, I’d be forced to do so. I jotted a few things down and I’m sure I’ll take questions eventually. Ladies and gentlemen I know I’ve addressed you a couple of times about my strong belief that the Governor of Enugu State should come from Nkanu East.

“I’m not from Nkanu East but I’m from Nkanu and I know before I come to the main issue, I had invited a number of young men from Enugu East Senatorial Zone for a conversation on how to develop Enugu State. I did that bcos I know there is an understanding among the people of Enugu state that governorship should rotate amongst the three Senatorial zones.

“That there should be a rotation of ownership among the three Senatorial zones. From my interaction with all of them, I looked at a number of them, and many of them I’ve spoken to and talked to them privately and we’ve held meetings and I was looking for somebody whom I think should re develop enugu state the way it was when I left it. I found a young man whom I never met before but we met briefly and he took me to his office and his business and that young man is Peter Mbah. Peter Mbah is not talkative, it’s not being heard here in Enugu state.

“As far back as October 2019 to be specific, I invited Peter Mbah to my house. When he came I told him young man I told him young men should consider running for a position in Enugu state in particular the governorship of Enugu state. And I also said, you don’t dwell in the private sector, u have no experience in the government and your from the neglected backward area of Nkanu why not take up this challenge.

“This was one one of the things that challenged me as a Wawa man to run as governor of old Anambra state when I was 39. I was invited by Zik, the late Dr. Nnamdi Azikiwe to run for the governorship of old Amanda state. And he gave me the reasons. (I’ll come back to that later) Peter Mbah did not say yes or no but said he would give it a thought and came back to me few weeks after and said that he will consider running. So, I said he should go on.

“Since then he has been quietly consulting widely and seeking advice from every important key stakeholder and myself. And based on my experience as the oldest, I repeat, as the oldest politician in Enugu state today and I’m Jim Nwobodo and I don’t know of any politician who is living today who is older than myself both in terms of experience and age. Politicians are very interesting people and they can twist and untwist.

“I too have had discussions with people. Those of you who were around last year must have seen the meeting the rally we held organized by Enugu East Senatorial Zone. Enugu East comprises Enugu North LGA, Nkanu East LGA, Nkanu West LGA and Isi-Uzo. Taking about six LGs that make up Enugu East Senatorial Zone. I have also been speaking with the governor of the state, very peaceful man; and I told him, and I believe he heard me, that anybody that will succeed Gburugburu must bring peace, continue with the peace he has set up in Enugu state. We are not going to any war, or into any rascality, or into vandalism and going to handle the government of enugu state peacefully.

“And Ugwuanyi has set the pace, comes out… He looks for nothing but a government job, make me SA, make me SPA… Make me this or that. But nobody has done anything about working for himself. And any LG or any state of the federation or any country that depends on government will never do well. So we need somebody who will develop the private sector where people can go to do their own work, create… This is the era of innovation. Start something yourself, run it, make yourself feel proud, don’t depend on government. And this is what I think of very important.

“When people say. I don’t know. When people say that I succeeded as Governor, it was because of my experience in the private sector. I had my own company, I built it up. I had branches in London, in Zurich, in USA ask over on my own and it helped me to run the state. If you have no experience in the private sector you would be unable to run a state properly because you’d depend on what you are told by the civil servants. I have heard all kinds of rumors about people claiming they brought…ot I’m sponsoring Peter Mbah.

“I am not going to talk about it because it is unnecessary but I know Peter Mbah also know that. I brought him into this place 2ce in the sense that I started speaking to him about this. I kept quiet because as an elder statesman I don’t need to dangle words with everybody. I know that there will be time to speak. And this is the time to speak. Time to speak because tomorrow, tomorrow, tomorrow is the D-Day for the primaries. And I plead with all of them that have bought their forms and put their hopes in this thing to get ready for tomorrow. All the delegates who are going, my plea is that you’ll bring a good candidate that you’ll build up Enugu State.

“I speak to the delegates. Since the past one or two weeks I’ve been making peace all over. Ike Ekweremmadu had been here to see me and over been discussing with him about peace. Sang I told him; how can you Ike Ekweremmadu fight against your own party? And I think this is working. I’ve asked him, if they’re is any case in court please withdraw it from the court. Let’s talk peace. Because with peace, you’ll succeed.

“You see, of you are running a state or any thing, a home if there is no leave you’ll not enjoy it. If in your home you have no peace, you will not enjoy it. So we need peace in Enugu. And that is the legacy the governor of Enugu state Gburugburu has left for us. It is a tall order. So I’m happy to say that I’m succeeding. For the past five days I have been meeting with Ekweremmadu and I have asked him please collapse your team, you pool, let them join the rest in making enugu state a peaceful state.

“There are many other people whom I have called… And I said please, please do not break Enugu State. It is important for you to know that if there is no peace here you pressmen would not be able to practice. If there is no peace in Enugu you would be unable to practice. You be so scared coming out. But outside be to Good that we have a man who has taken the issue of security and peace seriously and who ever is coming out should take peace as important but in
addition build the private sector. I also want to plead with.

“You could read them and enjoy but because as an old man, I don’t think I would enjoy lies. Perhaps I’m the oldest surviving member of the founders of the PDP, not only in Nigeria but in Enugu state. I’m one of the oldest surviving members. The rest have gone. Since God has kept me alive my job is to talk about peace and unity within the PDP and in Enugu state. Ekweremmadu has been very magnanimous to listen to me and I asked him go and withdraw your cased from court. Go and tell your people; collapse the people… Let them join the PDP… I think I’m succeeding. Ekweremmadu also is a major stakeholder in Enugu state, in PDP.

“He had called down and he is supporting. Two of them have met. Ekweremmadu had met with Peter Mbah and he is supporting Peter Mbah now. As I say this, there may be those who have come to me who also want to be governor of Enugu state but I have not made any thing completely to them because I am looking for somebody who will come in and bring peace. The worst thing that can happen to a state is instability and insecurity.”

On Ekweremadu’s ambition, Nwobodo said the former Deputy Senate President “has come to see me many times and I told him about the need for peace, I have asked him to withdraw all cases in court so that we talk peace.

“We need peace in Enugu and that’s the legacy Ugwuanyi is leaving behind.
“I have asked Ekweremadu to collapse his team, let them join the rest in making Enugu to work.

“I want to thank Governor of the State for the way he has piloted the affairs of the State,” he concluded.