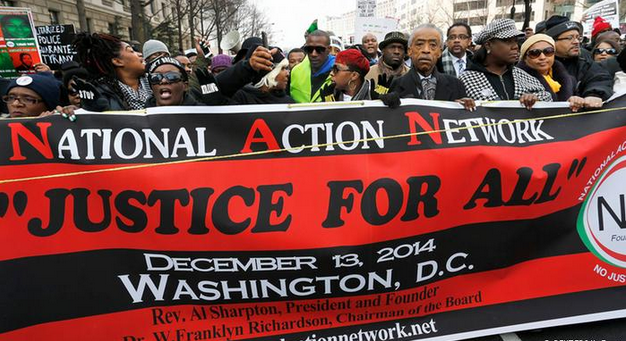 The death of the 22-year-old father of two was the latest in a string of killings of black men by police that have triggered street protests and fueled a renewed national debate about bias in the U.S. criminal justice system.

Saturday’s demonstration brought together a multi-racial crowd, many holding signs such as “Stop Police Rage” and “Power to the People.” It was led by retired National Basketball Association player Matt Barnes, who grew up in the area and had two stints with the Sacramento Kings franchise.

“We’re going to get some accountability for the stuff that continues to go on. And we’re doing it for the kids,” Barnes said as he held one of Clark’s young son.

Some of Clark’s relatives attended the gathering in a city plaza. It followed a more heated protest overnight, during which demonstrators yelled expletives at police clad in riot gear.

Clark was shot on the night of March 18 by police responding to a report that someone was breaking windows. Police said the officers feared he had a gun, but that he was later found to have been holding a cellphone.

Police have said he was moving towards officers in a menacing way. The shooting was captured on a body cam video released by police.

On Friday, an attorney for Clark’s family released a private autopsy showing most of the eight bullets that hit Clark struck him in the back, contradicting the police version of events.

Clark was shot six times in the back, once in the side and once in the leg, according to attorney, Benjamin Crump.

The Sacramento Police Department said it would have no further comment until after the release of the findings of an official autopsy by the county coroner, and a review by state and local prosecutors.