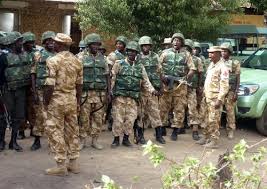 The Special taskforce, Operation Safe Haven in Plateau State, says peace is gradually returning to the State, which was once tagged a no go area in the Country.

The taskforce Commander spoke exclusively to TVC News on the progress made so far, at the Command headquarters in Jos, the State Capital.

Our Correspondent, Funom Joshua, reports that Plateau State, North Central Nigeria was before the crisis of 2001, known as the home of peace and tourism but the aftermath of the crisis changed the perception of visitors of  the state as a home to that of an unsafe, no go area

Crises have erupted in the State from to time even up to recent times , and despite the deployment of the Special taskforce to the State to help in
restoring peace and normalcy, the situation at a time, did not seem to yield results.

But for the first time now in many years the State is enjoying a long period of unbroken peace.

The STF boss says the approach used by the Operation Safe Haven in handling some of the key causes of crisis in the state in recent time seems the best at the moment.

He went further to explain some of the strategies used that is yielding results. But a lot is still dependent on Plateau residents who must move past the bitterness of the past and embrace each other irrespective of religion or ethnicity, if the state is to reclaim its name as the home of Peace and
tourism.