This is an indication that there is a fierce competition for places and a stronger mentality as factors in their rise.

The Old Trafford giants will kick off against Aston Villa on Friday second in the Premier League, just three points behind leaders Liverpool and with a game in hand.

The United boss said the players had grown mentally stronger since he had arrived in 2018. 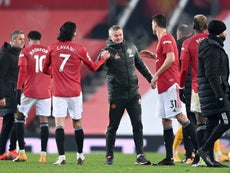 “One, they’re two years older than when I came,” he said on Thursday. “Two, some of them are really strong personalities that we’ve brought in and they have really been a good influence.

“I think we have competition for places, which means you cannot go around and think that you can just fake your way through being part of this team because you only deserve to be in a team that you contribute to.”

Solskjaer said his players had realised it was a privilege to play for the 20-time English champions.

“When you’re here, enjoy it as much as you can and maybe you’ll experience some fantastic times,” he said.

Solskjaer has so far been coy on talk about a push for a first Premier League crown since 2013 but was more forthcoming when it came to the advances made in his two years in the dugout.