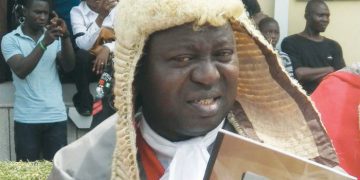 The Chief Judge of Lagos State and the Chairman, Judicial Service Commission, Justice Kazeem Alogba has sworn-in the newly appointed President and two members of Customary Courts in Lagos State.

He implored them to conduct themselves in a manner that would inspire and confer confidence in the Court system.

In his remarks at the ceremony held in Ikeja, the Chief Judge said that as the Temple of Justice, the Bench cannot afford to have its credibility put to question because the strength of the Judiciary lies in the confidence of people who approach the courts for resolution of disputes.

He said, “I expect the new President and Members of the Customary Courts to be faithful to the Oath of Office which they took and dispense justice without fear or favour. You must strive to ensure fair, impartial and independent administration of justice so that each citizen is treated with respect, dignity and fairness in the application of our laws”.

Justice Alogba described the judiciary as the last hope of the common man, maintaining that those who approached the justice system for dispute resolution should leave knowing that the Courts were there for them, administering justice fairly and impartially, irrespective of whose ox is gored or the calibre of people involved.