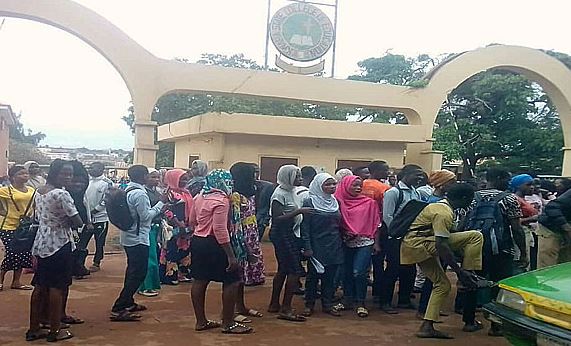 The Police on Monday dispersed protesting students of the College of Education Ilorin, Kwara State by firing tear gas at them.

The students were protesting over the non-payment of their lecturer’s salaries, a situation which had denied them the opportunity of continuing their semester examination.

The state government said it has released N125 million for tertiary institutions in the state as June subvention. This is just as the police dispersed the protesting students with teargas.

Correspondent Ibrahim Alege reports that the students had arrived on Monday morning to continue their exam only to be turned back by their teachers who refused to conduct the examination. They are aggrieved about the delay in the payment of their salaries.

Dissatisfied with the situation, some of the students protested.  They were met with stiff resistance from the police who dispersed them with teargas.

In the meantime, the Kwara state government said it has released N125m as June subvention for state-owned tertiary institutions.