The much awaited all-British heavyweight showdown between Anthony Joshua and Tyson Fury will now hold between May and June next year.

This is according to boxing promoter, Eddie Hearn, who said the deal has been verbally agreed.

Although the Matchroom promoter Hearn admitted that ‘minor issues’ need to be resolved before an official date is confirmed, he however said it likely to take place between next May or June.

The fight is set to be one of the biggest British showdowns ever as the two giants to head-to-head to determine who will be crowned undisputed heavyweight champion of the world. 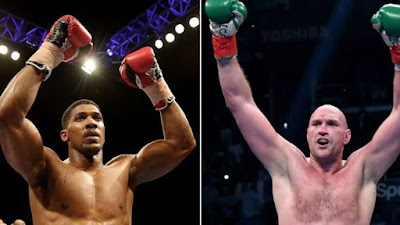 “Eddie Hearn says Tyson Fury-Anthony Joshua is verbally agreed to and contracts are being drafted for the heavyweight championship fight in May/June.

“Hearn says only ‘minor issues to resolve’ such as who walks last, the site, etc. This fight is going to happen next,” the Atheltic’s Mike Coppinger wrote on social media.

It is likely to be a two-fight deal worth a staggering £500million while the destination could be in the Middle East.

AJ overcame his first obstacle by breezing past Kubrat Pulev last weekend while Fury remains in a legal battle with Deontay Wilder over their failed trilogy of fights.