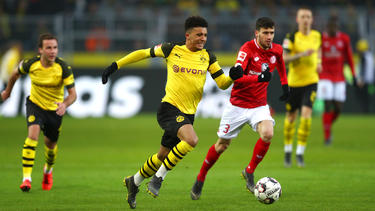 England forward Jadon Sancho made history with two more goals as Borussia Dortmund beat Mainz to go top of the Bundesliga, for a day at least.

The 19-year-old is the youngest player ever to score 11 Bundesliga goals.

Sancho hit a first-time half-volley from Mario Gotze’s cross to put them ahead, then added a deflected second from a Thomas Delaney ball.

Robin Quaison gave Mainz hope and only a remarkable triple save from Roman Burki late on saved Dortmund.

He denied Anthony Ujah three times in 10 seconds, stopping a header, a follow-up shot and an acrobatic volley from the Nigerian substitute on the line.

Dortmund go two points clear of champions Bayern Munich, who can go back to the summit if they win at Fortuna Dusseldorf on Sunday .