Nigeria arrested 55 members of a Biafran separatist movement on Monday during protests in the oil-rich southeast, police said.

Secessionist sentiment simmered in the region since the Biafra separatist rebellion tipped the country into a 1967-70 civil war that killed an estimated 1 million people.

In Enugu, a major city in the southeast, 41 members of a Biafra group were arrested, police spokesman Ebere Amaraizu said.

“They were not violent per se but they conducted themselves in a manner that could breach the peace,” he said. “They are still in custody and undergoing interrogation.” 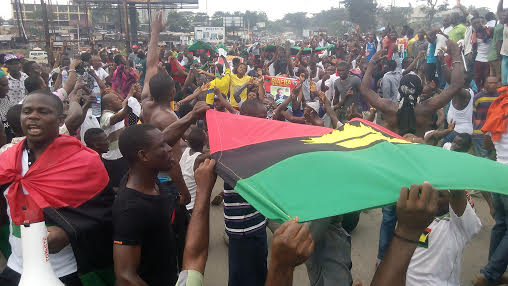 In Bayelsa state, part of the Niger Delta, 14 Biafra movement members who had been trying join a protest were arrested, said a police source.

Nnamdi Kanu, leader of the Indigenous People of Biafra campaign group, was released on bail on Friday after being detained for nearly two years.

He has been charged with criminal conspiracy and belonging to an illegal society.

Presidency commends agencies on arrest of Kanu, operation on Igboho