Clashes between police and ex-rebels in Ivory Coast kill 3

Clashes between police and ex-rebels in Ivory Coast kill 3

Three demobilised ex-rebel fighters were killed in Ivory Coast’s second-biggest city of Bouake on Tuesday, as they clashed with police attempting to end their protest over bonus payments, the Interior Ministry and a spokesman for the fighters said.

The ministry added that 14 others were wounded in the clashes, four seriously.

French-speaking West Africa‘s most important economy has rapidly recovered from a decade-long crisis that ended in a brief 2011 civil war, but unrest among mutinous soldiers and former rebels has exposed just how fragile those gains are.

Bouake was at the epicentre of two major army mutinies this year that revealed President Alassane Ouattara’s tenuous grasp on his military and associated armed groups.

The unrest also affected ports that ship cocoa out of the world’s leading producer, causing prices to briefly spike.

Tuesday’s violence erupted after former members of a northern rebellion who helped Ouattara to power in 2011 — and are demanding 18 million CFA francs ($30,800) as a reward — blocked the main southern entrance into Bouake.

Reuters TV images showed the ex-rebels erecting barricades out of tree branches and the Ivorian flag.

Amadou Ouattara, a spokesman for the ex-rebels, said policemen had fired teargas before shooting into the crowd. 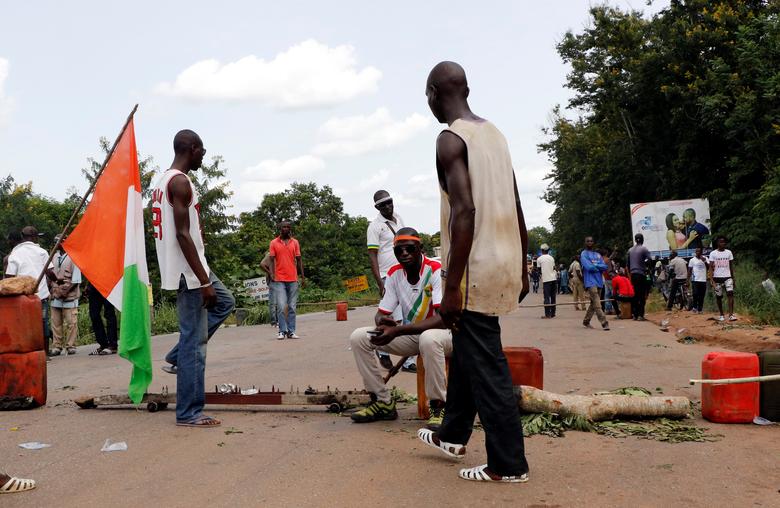 A policeman on the scene in Bouake disputed that, saying the injuries were caused by a grenade the protesters had set off, a version of events later espoused by the Interior Ministry.

“Certain of the armed protesters set off an offensive grenade which exploded among them,” the ministry said in a statement. “The toll is three deaths and 14 wounded from fragments of the grenades.”

It added that three gendarmes and two police were also wounded by projectiles.

Ouattara’s government last week agreed to pay around 8,400 mutinying soldiers 5 million CFA each, ceding to their demands in order to end a four-day uprising that blocked roads and shuttered businesses in most cities and towns.

However, the deal risks angering other factions in the military, which is still riven by civil war-era divisions between ex-rebels and former loyalist soldiers.

Tuesday’s protesters were part of a group of some 6,800 combatants demobilised following the conflict but who claim they are still owed for their service.

“What we want is the same money that our brothers in the military received,” their spokesman Ouattara said.