The All Progressives Congress has flagged off its Governorship campaign in Bayelsa with an assurance of job creation, empowerment and improved security, in the state.

Deputy Senate President, Ovie Omo-Agege and the Governors of Kano, Kebbi and Plateau States also affirmed confidence that the candidate of the APC, David Lyon will win the governorship election in Bayelsa.

Ogbia is the venue for the Governorship campaign flag off of the All Progressives Congress. 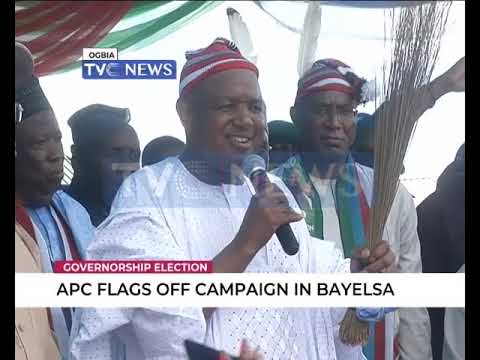 National Chairman of the party Adams Oshiomhole leads three Governors from the North and the Deputy President of the Senate to the rally.

The leader of the APC in Bayelsa Timipre Sylva and the Governorship candidate, David Lyon announceD what the party is bringing to the table.

Some former members of the PDP were officially introduced to leaders of their new party before the presentation of the symbol of representation to
the flagbearer.