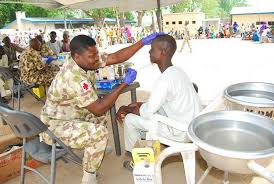 The Nigerian Air Force is scaling up its campaign to win the hearts and minds of the people by providing free Medicare to people in Monguno, northeast of Borno State.

4000 IDPs would benefit from the 2-day medical exercise beginning on Friday.

Defence Correspondent Sifon Essien reports that the exercise is also a means of gleaning information from the people in the wake of renewed terror attacks in the northeast of the country.

Monguno, a local council headquarters in Borno State, is brimming with a huge population of Internally Displaced Persons sheltered in several camps.

According to the UN Office for the Co-ordination of Humanitarian Affairs, an estimated 150, 000 IDPs live here.

They are faced with worsening food, shelter and sanitary conditions which have impacted negatively on their health.

The Nigerian Air Force seized this opportunity to provide free medical services to the people in Monfuno, particularly the IDPs.

Surgeries were also performed on patients with critical eye problems. The medical team expects that at the end of the 2 day exercise, 4000 persons would have gotten treatment.

The medical outreach is part of the second phase of the Nigerian Air Force Operation meant to literally rain fire on locations where renewed activities of the insurgents have been identified.