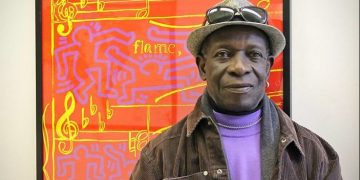 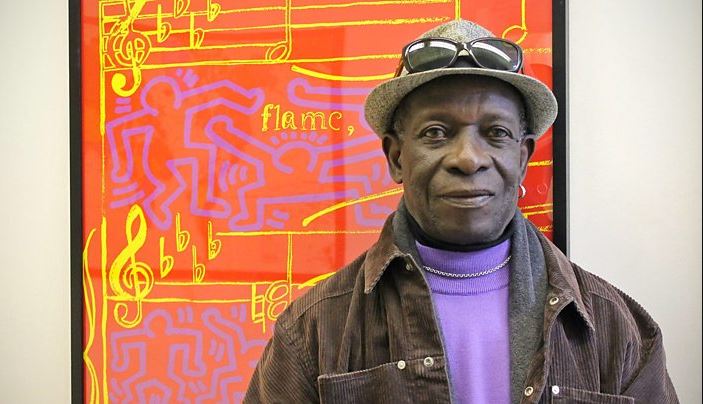 The global music industry has begun to pay tributes to the influential Afrobeat drummer, Tony Oladipo Allen, who was credited to have co-founded the late Fela’s distinctive music genre. Allen who helped define Afrobeat during his tenure with Fela Kuti gave up the ghost last Thursday at the age of 79. According to his manager, Eric Trosser, who confirmed the news of the drummer cum musician’s death, the late music icon was briefly ill and was admitted to Georges Pompidou European Hospital in Paris, France, where he died of an ailment confirmed to be abdominal aortic aneurysm. Since his death, music connoisseurs across all continents have been eulogising the late Nigerian drummer, singer and songwriter.

“Tony Allen was one of the giants of African music – who, with Fela Kuti, created the highly original and influential hybrid that became Afrobeat. This is painful” legendary British signer and producer, Peter Gabriel, wrote on Twitter. American-Australian musician, Flea, who was the bassist for rock band, Red Hot Chili Peppers and a collaborator of Allen’s shared a lengthy tribute on Instagram describing Allen as “one of the greatest drummer to ever walk this earth”.

He wrote: “What a wildman, with a massive, kind and free heart and the deepest oneof- a-kind groove. Fela Kuti did not invent afrobeat, Fela and Tony birthed it together. Without Tony Allen, there is NO afrobeat.” American Rapper, Biz Markie, also compared Allen’s influence on popular music to that of Bo Diddley, a pivotal figure in the transition from the blues to rock and roll. He said: “Tony Allen’s influence on popular music was so unsung and undercelebrated.

Hard to find a more influential band than Talking Heads whose best songs mostly involved riffs on Fela’s rhythm – which was largely driven by the imagination, power and athleticism of those drums and grooves.”

Meanwhile, the Kuti family has also expressed their grief over the loss of the late drummer who despite parting ways with Fela in November 1978, remained close to the family. While speaking with Saturday Telegraph, Seun Kuti noted that the death of the late music maestro was a big blow to global music. “Uncle Tony was always available to me and even though we had our differences, there was never anything but love and respect between us.

He was an enigma; a pure artiste and fierce competitor. His loss is a big blow for anyone who cared about music all over the world. I’ll miss him.” Also speaking about Allen, Nigerian singer and Grammy award nominated songwriter, Bankuli, also told Saturday Telegraph: “Not only was he a co-creator but he never stopped at that, he moved across the world to teach and inspire different musical cultures about Afrobeat vibe”. As a member of Fela’s band, Africa ’70, Allen helped revolutionise the art of drumming, simultaneously anchoring and propelling Fela’s classic albums like 1973’s ‘Gentleman’, 1975’s ‘Expensive Shit’ and the Afrobeat legend’s most enduring work, 1976’s ‘Zombie’.

Each of Fela’s work depended on the grooves of Allen’s drums. Widely hailed as one of the founders of Afrobeat alongside his longtime musical partner Fela, with whom he played for 15 years, Allen died on Wednesday evening in Paris, France, after suffering from a heart attack, his manager, Mr. Eric Trosset, told NPR. His manager, Trosset told Agence France-Presse (AFP) that Allen took ill in the afternoon and was taken to the Hôpital européen Georges- Pompidou, where he died. Behind the kit, Allen used his whole body — laying out intricate polyrhythms with all four limbs-he was so dexterous, it often seemed like he had more than four. During their hey days, Kuti famously remarked that: “Without Tony Allen, there would be no Afrobeat.”

Allen was born Tony Oladipo Allen in Lagos, Nigeria, in 1940 even though he didn’t begin playing the drums until age 18. But once he began, that was it. Just months later, while he was working as an electrical technician for a radio station in his native Lagos, he announced to his disappointed parents that he intended to become a musician. Allen met Kuti in the early 1960s, when both were gigging around Lagos. By 1964, they were playing together: first American-style jazz, and then, for about five years, a more African-inflected, highlife jazz. In 1969, they formed the legendary band Africa 70.

He came of age idolising such American jazz drummers as Gene Krupa, Art Blakey and Max Roach. As he told NPR’s Weekend Edition in 2010, “Fela wrote like a singer; I write like a drummer.” That highly combustible mix was exactly the magic of Afrobeat: thickly layered horns and soaring vocals with wry lyrics, laid over an unforgettably mighty, driving groove. It was a sweaty, exuberant amalgamation of African styles like highlife and juju, American jazz, and something entirely new and thoroughly self-confident. In a blazing run, Allen recorded more than 30 albums with Kuti and Africa 70 — including the classics Shakara, Expensive Shit, Sorrow Tears and Blood and Zombie. The two also recorded three albums under Allen’s name: 1975’s Jealousy, 1977’s Progress and 1979’s No Accommodation For Lagos. 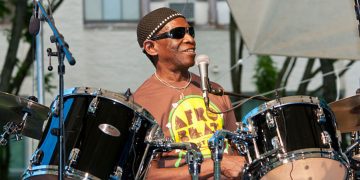