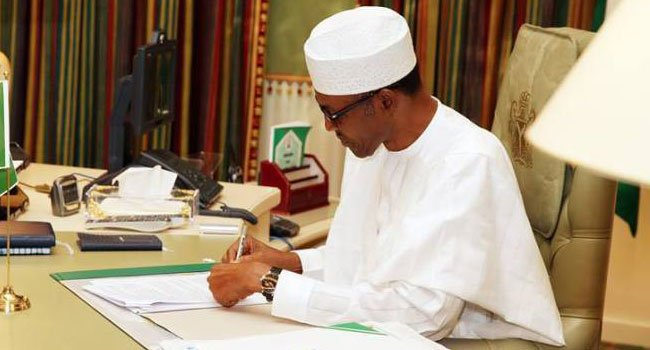 President Buhari, in a brief ceremony at the Presidential Villa, Abuja, pledged his continued support for the socio-economic development of the Niger Delta region. The President according the statement signed by his Senior Special Assistant on Media and Publicity, Malam Garba Shehu said: “This administration is fully committed to supporting the Niger Delta in its endeavours to achieve socio-economic development.”

He appealed to all communities in the region to strive for peace through dialogue in resolving all conflicts not only among them, but also with business entities and the authorities. With the signing of the bill into law, the path has been cleared for the establishment of the specialised university in the Niger Delta, charged with training and research in petroleum technologies. Recall that the Federal Government in 2006 under the leadership of former President Olusegun Obasanjo approved the upgrading of the Petroleum Training Institute (PTI) Effurun into a degree awarding institution. With the approval, it became the first Nigeria Petroleum Engineering University with the former PTI operating as one of its faculties. The Nigerian Senate passed the bill establishing the Petroleum University in 2014.