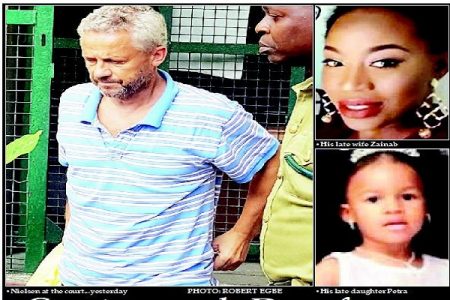 Why Justice Okikiolu-Ighile sentenced Peter Nielsen to death by hanging

Justice Bolanle Okikiolu-Ighile delivered down the judgment in a more than 5-hour long hearing which started at about 11:15am and ended by 4:30pm.

Justice Okikiolu-Ighile, based her decision on the post mortem examination led by Professor John Obafunwa on the deceased persons who had submitted that the bruises found on the neck of the head and neck of Zainab were consistent with blunt trauma.

That autopsy report also stated that the “tiny signs of bleeding” proved smothering as cause of death.

Smothering which caused the absence of oxygen to both deceased persons was also established as the cause of Zainab’s death which the court held that, “couldn’t have been self inflicted or due to epilepsy as that wasn’t included in her medical history.

On whether the deaths were caused by the defendant (Peter Nielsen), the court recounted several testimonies by the prosecution’s witnesses including a housemaid, Zainab’s sibling and two police officers who testified during the trial to incidents of domestic violence perpetrated by Mr Nielsen on the late musician.

The court particularly described Xainabs sister, Pepe, who was about 13 years old at the time of the incident as a witness of truth who testified about a fight between the couple in 2017, adding that the defendant had threatened to kill her if she ever told anyone about what she saw.

According to the court, DNA results of the extracts found under zainab’s fingernail showed she tried to fight back in the deadly encounter and that those samples were found to match that of the defendant.

The court added, that the fact that he didn’t call for help immediately he claimed he found them lying down in the kitchen, but carried them to the living room and applied CPR on them, showed “he himself certified they had died before calling for help. I find it hard to believe he is absolved of having a hand in their deaths.”

The court also noted that the couple were found to have fought that night, despite his denials and claims that he had a pleasurable night with his family.

“The evidence shows that he beat his wife, and smothered them. Police extracts showed reports of domestic violence by the defendant. Zainab once ran away to Abuja and said she wanted a divorce, which wasn’t even necessary, because her marriage to the defendant was null ab initio as he was still married to his wife in Denmark and has three children with her. She even prophesied her death by telling her driver and step-dad that the defendant will kill her. This is a case of domestic abuse. The DNA result showed she tried so much to defend herself. But unfortunately, it was too late.”

In her sentencing, she held that, in Line with Section 223 (2) of the the Criminal Laws of Lagos state, 2015, “subject to the provision of any other law, death sentence is the punishment for murder. I hereby find you, Peter Nielsen, guilty of the murder of Zainanb and Petra, as charged. I also prescribe the sentence of the court upon you for both counts of murder, to be death by hanging. May the Almighty God have mercy on your soul.”