Nigerian forward, Victor Osimhen has won the Marc-Vivien Foe award for the best African player in the French League the 2019-2020 season.

Osimhen was chosen by a jury of sport journalists ahead of Algeria’s Islam Slimani who plays for Monaco and Moroccan defender Yunis Abdelhamid of Stade Rennais. 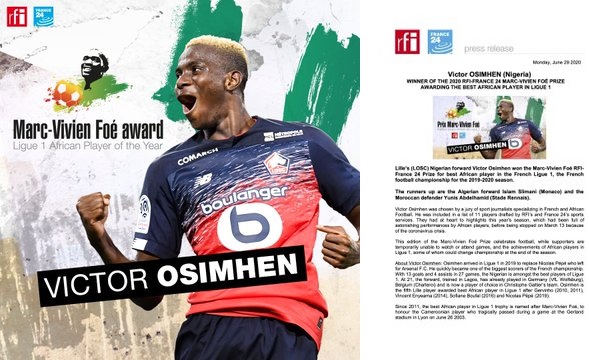 The 21 year old who plays for Lille Metropole scored 13 goals and 4 assists in 27 league games for his club after joining last summer as a replacement for Nicolas Pepe who left for Arsenal.

He becomes the second Nigerian to win the coveted award after former Super Eagles Goalkeeper, Vincent Enyeama who won in 2014 while also playing for Lille.

The Marc-Vivien Foe Prize for the best African player in Ligue is named in honour of the late Cameroonian player who tragically passed during a game at the Gerland stadium in Lyon on June 2003.