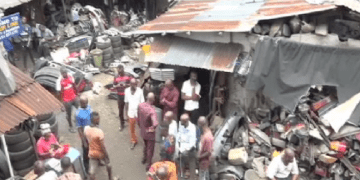 Traders at the Ikoku Vehicle Spare Parts Market in Port Harcourt are now counting their losses after an overnight attack by suspected thugs.

This is the latest development in an ongoing disagreement over a controversial plan to evict the traders from a section of the market.

The shop owners said they only received an oral notice on the 7th of August, 2020 to vacate the area.

According to them, the three weeks notice given by the owner of the land had not expired before armed thugs stormed the market at midnight, damaging stores and goods worth millions of naira.

The traders are appealing to the Rivers State Government for help.

Uncertain about what the future holds, affected traders are already moving their goods to other locations for safe keeping.