President Muhammadu Buhari, on Friday approved the immediate suspension of the acting Chairman of the Economic and Fiancial Crmes Commisson, Ibrahim Magu.

The president also approved the appointment of Mohammed Umar as acting chairman pending the completion of the ongoing investigation of the allegation against Ibrahim Magu.

This is contained in a state statement issued by the media aide to the Minister of Justice. 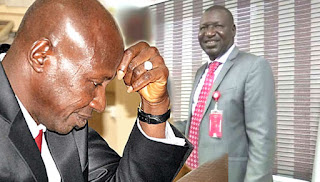 But how much do you know about the new acting EFCC chairman.

• Until his appointment, Mohammed Umar served as the director of operations of the EFCC.

. He is the fifth official to lead the commission.

. Mr Umar is also a deputy commissioner of Police.

Mohammed Umar is the second most senior official at the agency and he is also a devoted Muslim.