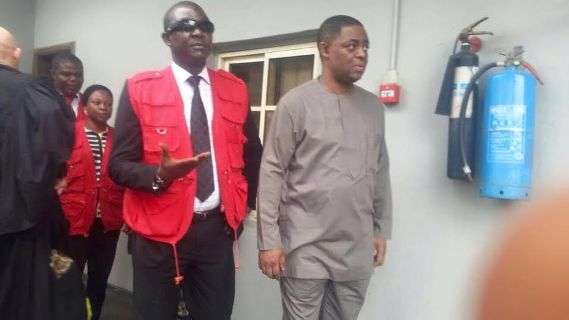 TVC N. Governor Ayo Fayose on Tuesday visited the detained former Minister of Aviation, Femi Fani-Kayode, in the custody of Economic and Financial Crimes Commission, an aide has said.

Jude Ndukwe, Mr. Fani-Kayode’s media adviser, said Mr. Fayose arrived at the EFCC facility in Abuja where the ex-minister is being detained. He said the governor spent more than two hours chatting with him.

“The governor visited Fani-Kayode in EFCC custody on Tuesday afternoon and spent quite some time encouraging him,” Mr. Ndukwe said.

An EFCC officer, simply identified as Madaki, was the one who welcomed the governor when he arrived at the EFCC headquarters at 2:15 p.m.,” Mr. Ndukwe said.

The former minister is expected to be arraigned on November 10 at the Abuja Division of the Federal High Court.