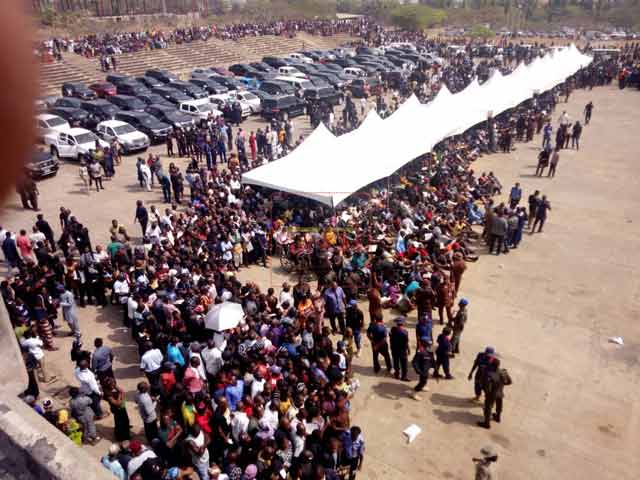 Benue State Governor, Samuel Ortom has solicited for divine forgiveness for persons claiming that Benue indigenes were responsible for the crisis in their state.

The Governor was speaking at the first year memorial service in honour of those massacred in January 2018, by suspected herdsmen militia.

Godwin Agwam reports that Benue was thrown into mourning a year ago, precisely, January 11, 2018, when victims of attacks by herdsmen militia, were given a mass burial by the Benue State Government and the catholic dioceses. The victims were called the the Seventy-three heroes

The event took a new twist when reports started flying round that indigenes of the state were responsible for the heinous act.

The speculations have lingered but at the memorial service to mark the first year since victims of the attacks were given a state burial, the Benue state goveronr decided to respond. He asked for God’s mercy on those who attempted to change the narrative.

The governor also disclosed that 400 persons have so far been arrested in connection with the massacres going on in the state.

For CAN and the catholic dioceses in Makurdi, the memorial service was necessary to refresh their minds on the incident the befell the state.

The memorial service was attended by sons and daughters of Benue State and a congregational hymn was sang in remembrance of the fallen heroes.