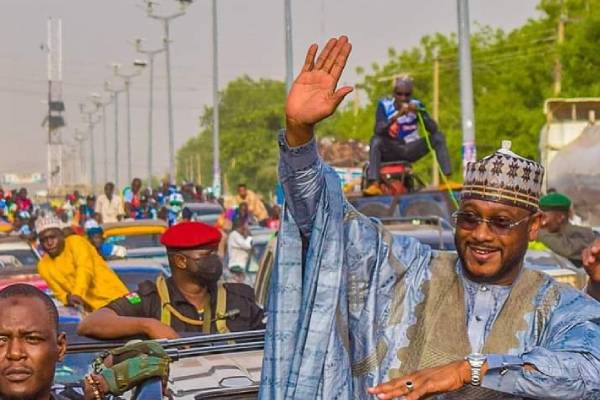 A frontline Gubernatorial aspirant under the platform of the People’s Democratic Party in Zamfara, Dr. Dauda Lawal said if given the opportunity to serve as Governor, the State will be a reference point for new ideas, dynamism, development, and endless possibilities

He said he would develop an agro-allied economy, create job opportunities, and provide an enabling environment for small, medium, and large scale businesses to thrivehttps://www.tvcnews.tv/purplegold/post.php?post=197764&action=edit#

Dr. Dauda adds that such can only be a reality with effective, capable, competent, courageous, and visionary leadership and that he poseses all the qualities

Zamfara State is Suffering from activities of armed bandits, Cattle rustling, Kidnapping and other Criminal activities for almost two decades, Dr. Dauda said he will change the negetive Narratives and bring rapid Development to the state if elected as Governor, hence the need for someone with a heart of gold that will change the gamehttps://www.tvcnews.tv/purplegold/post.php?post=197764&action=edit#

Under his watch if elected Zamfara Governor, he said Insecurity will be a thing of the past, highways will be safe, farmers will be safe in their farms and will restore the lost glory of farming as a result of Insecurity

” If truth be told, the good people of Zamfara are not asking for much from anyone aspiring to lead them in 2023. They just want a person that would bring an end to banditry, secure farms, and restore the glory of farming, provide good roads, good hospitals, good schools, and a constant supply of electricity” Dr. Dauda Said. “Our people want potable water, food to eat, and a roof over their heads. It is time to come up with sensible policies that will create opportunities and address the heart-touching humanitarian crisis. People want to be safe, to leave their lives without fear. These are the yearnings in our hearts.” He further assured.

On human and Natural resources, the Banker Turns Politician insist that the state is blessed with abundance of mineral resources, yet untapped and one of the states with the most intelligent and resourceful people on earth

“Zamfara state is an agricultural state with over 80 percent of the people engaged in various forms of agriculture. Major agricultural products include millet, sorghum, guinea corn, maize, rice, groundnut, cotton, tobacco, and beans. Yet we are facing numerous humanitarian crises including food crisis, poverty, and unemployment, all due to the lingering insecurity ravaging the state”

“We have an abundance of mineral resources, yet untapped, We have some of the most intelligent and resourceful people on earth, yet we cannot address these disturbing issues and make Zamfara work” He added.

On Infrastructure and developmental projects, Dauda Lawal said it is time to rescue and rebuild Zamfara State

Twenty five year after creation, Zamfara state according to the PDP Governorship aspirant has not fulfilled its potential

“On October 1st, 2022, our Dear State will turn 26. Whilst we thank those who have contributed positively to the development of our homeland, the good people of Zamfara are unanimous on one verdict: our great state has not fulfilled its potential and our realities are far from our ideals. It is time to rescue and rebuild Zamfara” Dr. Dauda Insist

“25 years after the creation of Zamfara State, we have failed to realize and utilize the potential of this state. Farming and trade are our main occupations and our Central source of income. Irrigation is required for cereals and legumes hence our slogan “farming is our pride”

Dr. Dauda Lawal a two times Governorship aspirant insist, he is the best man for the job who will take Zamfara State to the promise Land if elected Governor under the platform of the PDP

” I present myself as a capable, competent, and tested hand to make Zamfara better. I have the ability, courage, energy, and vision. I believe it can be done; and I indeed call upon you, to join me and let’s get it done. Zamfara must be great under my watch” Dr. Dauda Lawal Said.

Dr. Dauda Lawal is a retired Executive Director of First Bank, Nigeria and had Contested the Zamfara State Governorship seat in the 2019 General Elections.