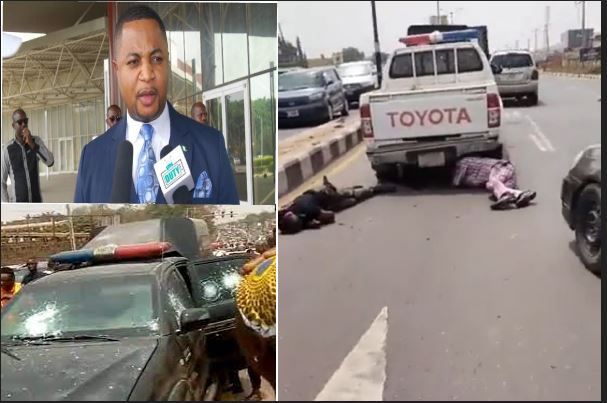 A presidential hopeful, Dr Nicolas Felix has condemned the robbery attack that claimed lives of many Nigerians, including Police officers in the ancient city of Ibadan, Oyo State capital.

In a statement he personally signed and made available to journalists, the Edo-born politician described act as barbaric and called on the police to investigate and arrest those inglorious daredevils, making life unbearable to innocent citizens.

He sympathised with the families of those who lost their loved ones and valuables in the dastard act.

A group of armed robbery gang had on Thursday attacked a bullion van around Idiape area of Ibadan, killing some policemen and passers-by and carted away an undisclosed amount of money.

Read his full statement below

Yesterday, in the ancient City of Ibadan, several people lost their lives including two Police officers during an attack on a bullion van at about 1pm February 10th, 2022. I sympathize with the families of those who lost their lives.

Our thoughts and prayers are with them.

Let it be known that I (Dr. Nicolas Felix) vehemently condemn such barbaric act, and we urge the police to investigate and arrest those inglorious daredevils, making life unbearable to innocent citizens. Those hoodlums should, as a matter of urgency, arrested and brought to book.

I must not fail to remind Nigerians that the primary responsibility of any government is to protect the lives and properties of the citizens, but our government has failed woefully on this.

It is highly reprehensible on the part of the security agencies, that such dastardly act occurred broad day light, In a busy high-brow street, wherein these evil men robbed and killed innocent people with ease, with so many left traumatized just because they know they(daredevils) can get away with it. We must not allow these senseless killings to continue unabated.

We must do something about this menace, this is why am saying it loud and clear that, come 2023, everyone of us must make a wise decision while casting their votes. It’s foolhardy for us to retain our current political profiteers, come 2023.