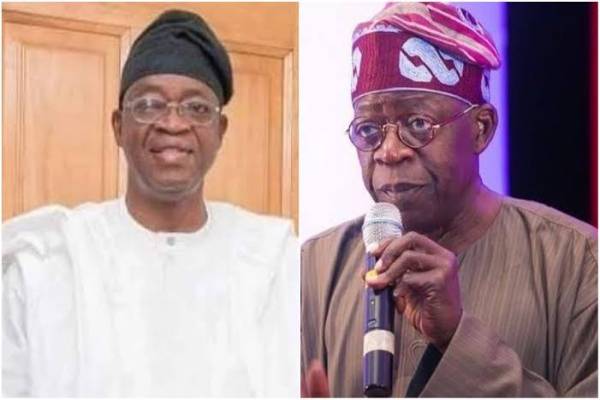 The National Leader of the All Progressives’ Congress, Asiwaju Bola Tinubu, has congratulated the Governor of Osun State, Alhaji Gboyega Oyetola, for emerging victorious in the Governorship primaries of the party held on Saturday.

The APC Leader described the verdict by the members of the party across the 332 wards of Osun State as unambiguous and a clear mandate to contest for second term in Office.

He thanked the leadership of the party ensuring the successful conduct of the primaries through the mobilisation of party members in large numbers across the State.

He urged members of the party to continue to remain peaceful and follow the principles of Democracy as exemplified in the party’s primaries.

Asiwaju Tinubu while congratulating the Chairman of the Governorship primaries committee, Kwara State Governor, Abdulrahman Abdulrasaq, also commended the security agents for their sagacity in ensuring that members were able to exercise their franchise under a peaceful and convivial atmosphere.

He gave kudos to the the duo of Alhaji Moshood Adeoti and Honourable Lasun Yusuff for exercising their democratic franchise peacefully while urging the governor to extend hands of fellowship to all those who vied for the ticket with him to ensure the party goes into the July 16 governorship election in Osun State as a United family.

Just In: APC notifies INEC on conduct of zonal congresses

Updated: Why court refuses to order release of Abba Kyari