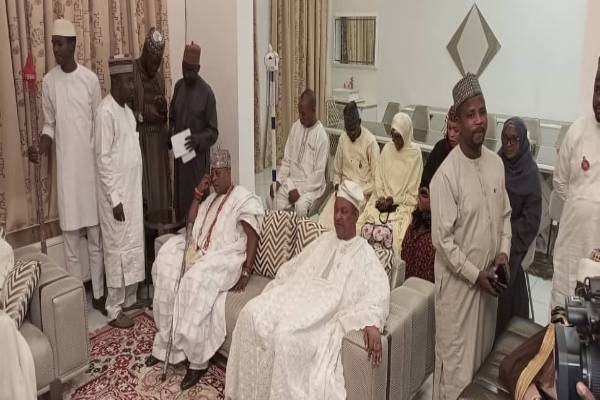 A member of the House of Representatives representing Iseyin/Itesiwaju/Kajola/Iwajowa, Shina Peller, claims that over 35,000 people were killed and others were displaced as a result of insecurity in Nigeria in 2021.

The Federal Lawmaker insists the menace of Banditry, Kidnapping, cultism and other vices will continue to spread, unless youths are positively engaged

Shina Peller stated this in Gusau, the Zamfara State Capital during the Ayedero Peace tour to the state

According to him, some States in Northern Nigeria have experienced insecurity for years and Zamfara is one of the worst hit especially by activities of armed bandits and Kidnappers, which has resulted in the death and displacement of thousands

Like other Nigerians, the federal lawmaker Shina Peller, who is the Ayedero of Yorubaland, is worried by this development

He says, engaging youths positively will help address the menace of Insecurity across the country

Hon. Shina Peller also seized the opportunity to address a group of young people under the aegis of Shina Peller Youth Network, on the need for them to be advocates of peace. He also enjoined them to take part in the political process that produces who their leaders are by equipping themselves with party’s membership cards and permanent Voters Card PVCs.

Responding, Governor Bello Matawalle of Zamfara State represented by the permanent secretary Ministry of Humanitarian Affairs and Disaster Management Tukur Shehu and the Chairman, Zamfara State council of Chiefs represented by the Emir of Gusau Ibrahim Bello commended the lawmaker for his quest to promote peace and Harmonious co-existence among Nigerians

They described the visit as show of true love by the Federal lawmaker and the Yoruba race as a whole.

To ease the sufferings of the Internally displaced Persons in Zamfara, the Ayedero of Yorubaland also donated food items to the Victims of armed bandits attack.

He promised to continue to work tirelessly with the Zamfara State Government in ensuring lasting peace returned to all troubled communities.

The Ayedero of Yorubaland was accompanied by some traditional rulers, Yoruba Traditional Dance troop among others from the South western states.