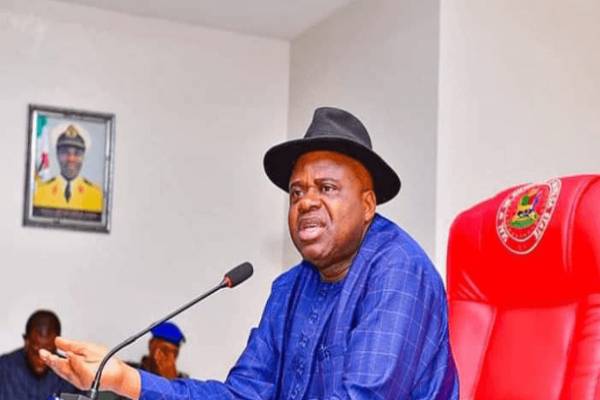 Governor of Bayelsa State, Douye Diri has described the state as one of the most affected by climate change in Nigeria due to high levels of carbon emissions and environmental degradation.

Governor Diri made the statements after hearing a report on the state’s participation in the 26th United Nations Conference of Parties on Climate Change (COP26), which will take place from October 31 to November 13, 2021 in Glasgow, Scotland.

After receiving the report from a consultancy firm, Ecologistics Integrated Services, at the Government House in Yenagoa on Thursday, the governor said in a statement on Friday titled, ‘Bayelsa, centre of climate change effect in Nigeria,’ that the world was transitioning from oil to cleaner energy, and that everyone involved should be a part of the process so that the state did not fall behind.

He also called on environmental activists to partner with the government to attract the needed resources for the development of the state.

He added that Bayelsa was one of the most affected states by climate change, and that the gathering provided them with an opportunity to express their concerns on a global scale.

Diri noted that the state was blessed with abundant resources that needed to be harnessed through partnership and collaborations.

He said, “Bayelsa State is one of the most affected by climate change in Nigeria. Bayelsa is at the epicentre in terms of climate change. Our people and environment have been affected. Recently, we had one of the worst oil spills in the world in Nembe community. That explains what people are suffering in the state. For us, that was an opportunity to take our issues to the world.

“Join hands with the state government and see what Bayelsa will make out of this transition in terms of partnership, technical know-how and attracting the finances out there for our state.”

The president of Ecologistics Integrated Services, Paul Abolo, who presented the report to Diri, said the governor’s move demonstrated the state’s quality of leadership, adding that no state government in Nigeria has engaged in climate action like Bayelsa.

Governors will use state police to pursue political agenda- Udensi