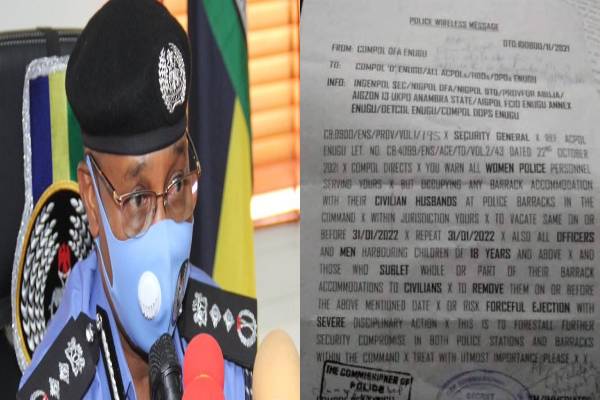 The Nigeria Police Force has reacted to the viral signal which originated from the DFA, Enugu State Police Command and addressed to all ACPs, HoDs & DPOs in the State, warning  “ALL WOMEN POLICE PERSONNEL SERVING WITH THEIR CIVILIAN HUSBANDS AT POLICE BARRACKS IN THE COMMAND X WITHIN JURISDICTION YOURS X TO VACATE SAME ON OR BEFORE 31/01/2022 X REPEAT 31/01/2022.“ 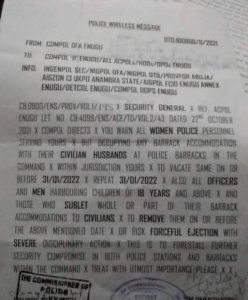 The Inspector General of Police, Usman Alkali Baba, psc (+), NPM, fdc, in a statement on Thursday promised that no female police officer will be ejected for living with a civilian spouse in Police Barracks across the country.

The IGP, who is displeased with the aforementioned “directive,” described it as illegal, discriminatory, obnoxious, reprehensible, and completely at odds with the concept of equality as enshrined in our Constitution.
He pointed out that the “directive” contradicts the Force Gender Policy, which establishes gender mainstreaming as a core value in the Nigeria Police Force. The IGP also mentioned a Police Force that has produced a number of high-ranking, successful female officers, including Deputy Inspectors General of Police (DIGs), Assistant Inspectors General of Police (AIGs), State Command Commissioners of Police, Area Commanders, DPOs, eminent Spokespersons, an Olympic Gold Medallist, amongst others, will never walk such a retrogressive path.

Meanwhile, the IGP has ordered the Force Provost Marshal to conduct an immediate investigation into the viral document, threatening stern disciplinary action against anyone found guilty. He advised members of the public, particularly female police officers and their families, to disregard the unconscientious directive because it is null and void and has no effect. The IGP also reaffirmed the Force’s commitment to advancing all members’ general well-being, rights, and privileges, regardless of rank or gender.