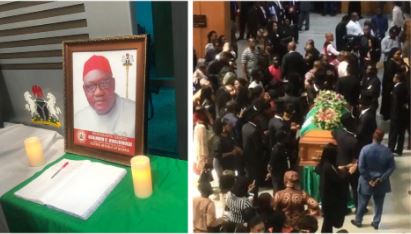 The Nigerian Senate is currently holding a valedictory session in honour of Imo North Senator, Benjamin Uwajumogu,  who died on Wednesday the 18th of December 2019 .

Until his death he served as Senator Representing Imo North Senatorial District in the 9th National Assembly and Chairman of the Senate Committee on Employment, Labour and Productivity.

The late Senator will be laid to rest on Friday, 21st of February ,2020, at his country home in Umuihi Village, Ihitte/Uboma LGA, Imo state.

The Senate says he will be greatly missed for enormous contributions to the debate and activities of the upper legislative chamber.

Sowore to be re-arraigned on fresh charges