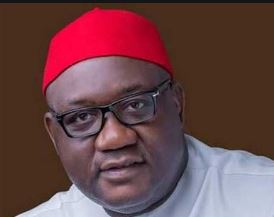 The senator representing Imo north, Benjamin Uwajumogu, has died at the age of fifty one.
He had slumped in his home before being taken to a private hospital in Abuja.

Some lawmakers say he appeared healthy and even contributed to debates on the floor of the upper legislative chamber on Tuesday.

The death of the senator is the second to be recorded in the ninth assembly since its inauguration in June.

Until his demise, Mr Uwajumogu was the chairman of the senate committee on employment, labour and productivity.

The President of the Senate Ahmed Lawan has expressed shock over the Senator’s sudden death.

Mr Lawan says the news was difficult to take in as the late Senator always made robust contributions to debates in plenary.

The President of the Senate sends his condolence to Mr Uwajumogu’s family and the government and people of Imo state.