President-General of Ohaneze Ndigbo Worldwide, Nnia Nwodo, has described former president Goodluck Jonathan as an icon whom the Igbo nation will not forget in a hurry.

He was speaking at a dinner organised for the former president by the governor of Enugu state, Ifeanyi Ugwuanyi. 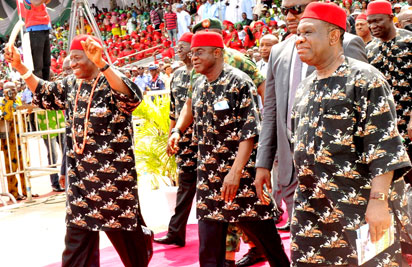 Prominent Igbo leaders were present to honour the past president and recount his contribution to nation-building.

Former President Goodluck Jonathan was a special guest of the Enugu state government where he had dinner with governor Ifeanyi Ugwuanyi.