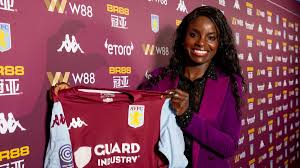 The 32-year-old , recently announced her retirement from playing, but is back working in football after becoming Villa Women’s first-ever sporting director.

Aluko, who played for Birmingham City, Chelsea and Juventus as well as clubs in the United States, later thanked a number of people who helped her land the job, including Villa’s assistant boss Terry.