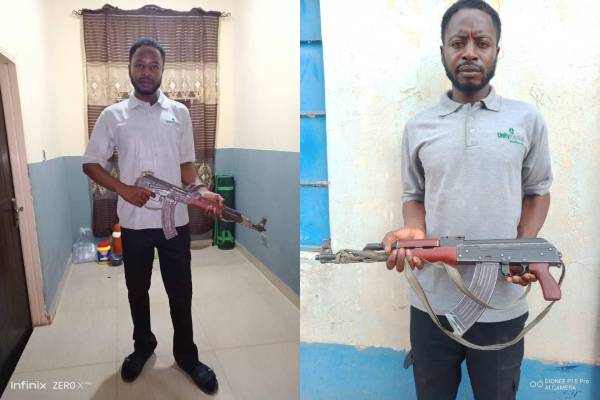 Arrested Kaduna Councillor with the AK-47 Rifle and Ammunition

A serving member of the legislative council of Soba local government area in Kaduna state has been alleged arrested with an AK – 47 rifle loaded with six rounds of ammunition.

The police authorities in Kaduna state say he was intercepted on a motorcycle by operatives on patrol in Giwa Local Government Area.

Kaduna Police spokesperson, Mohammed Jalige explained that in the course of investigation, the councilor confessed he was bound to deliver the said firearm to bandits.

https://www.tvcnews.tv/purplegold/post.php?post=197039&action=edit#The suspect Abdulrahaman Adamu represent kinkiba ward in Soba local Council and the incident occurred on the 9th of May at about 8PM. 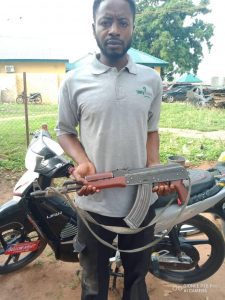 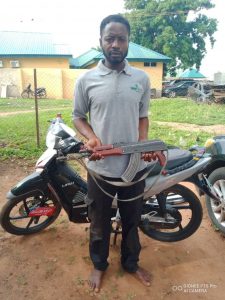 The Commissioner of the Kaduna State Police Command Yekini Ayoku has ordered a full scale investigation to unravel others involved in the act.

https://www.tvcnews.tv/purplegold/post.php?post=197039&action=edit#Giwa local government area has come under severe terrorist attack in the past six months with more that 150 people reportedly killed.

In March of this year Bandits klilled People in Six Villages of teh Local Government while 23 Other People were also killed in the same perido between the 26th and 30th of March.

His arrest would also be seen as a major success for the Security Forces in the State with the issue of Collaborators a major one that has defied many solutions.

The State Government and Security Agencies in the State have always alleged that collaborators have made it difficult to bring than the alarming insecurity in the State.

The Recent attack by Bandits/Terrorists on the Kaduna-Abuja passenger train has been attributed to the work of collaborators.

The State Governor Nasir El-Rufai who has vowed never to negotiate with Terrorists and instead called for a carpet bombing of Bandits/Terrorists enclaves in the State will be a happy man following this arrest, especially following allegation before now of the complicity of some government functionaries in the meance that insecurity has become in the NorthWest.

Nigeria will prevail over all, Religion is not our problem – Pastor Adeboye