The Speaker of the Lagos State House of Assembly, Mudashiru Obasa, on Sunday evening got the endorsements of respected leaders of the State from Agege and Orile-Agege for a return to the House.

According to a statement issued on Monday by Eromosele Ebhomele, the Chief Press Secretary to the Speaker, the leaders all agreed that Speaker Obasa has an unbeatable chance of winning if he vied for a seat in the Senate ahead of the 2023 election, but said their appeal for his return to the House of Assembly was in the interest of the entire Agege people and Lagos state, which he has made better through effective legislations and related activities.

At an Iftar programme that inadvertently provided an opportunity for the leaders to speak about Obasa’s achievements so far, the leaders said the Speaker had become a pride, not only to Agege, but to Lagos State. 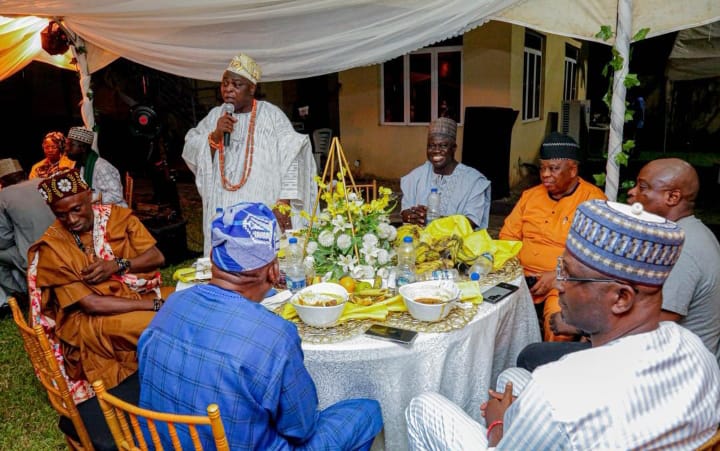 At least 80 leaders, political appointees and chieftains of the All Progressives Congress (APC), including Dr. Babatunde Adejare of the House of Representatives; Wale Ahmed, Lagos Commissioner for Local Government and Chieftaincy Affairs; Afolabi Ayantayo, Special Adviser to Governor Babajide Sanwo-Olu, Parastatals Monitoring Office; and Oba Ambaliu Hakeem Agbedeyi, the Alaige of Orile Agege supported that the Speaker return to the House.

While urging that the Speaker be asked to return to the House, Adejare said Agege is now noted for good road networks with the help of Obasa.

“Days ago, during the 80th birthday of Ebenezer Obey, a visiting Senator was marvelled that Agege now has very good roads. I told him not to forget that we have the Speaker of Lagos here,” he said while praying for more wisdom for Obasa in his leadership position.

Wale Ahmed who said he expects Obasa to be unopposed, added: “My prayer is that after the elections next year, we would all gather here to celebrate again.”

Oba Agbedeyi, while thanking Obasa for positively making Agege a place to reckon with, urged the Speaker to return so as to bring more developments to the area.

Mr. Johnson Sunday Babatunde, chairman of Orile-Agege LCDA, who led the conversation, warned that Agege must not lose all that it had gained through Speaker Obasa. Rather, he said, the area should experience more dividends of democracy.

He noted that one way Agege can appreciate Obasa’s love for the area is to ask him to return and work for him to occupy the position again.

Supporting the collective decision by the leaders, Ganiyu Egunjobi, chairman of Agege local government council, said the Speaker had brought glory to Agege and that he should be encouraged to return to the House unopposed.

Earlier, the Islamic clergy at the Iftar, Chief Imam Quadri Abdul Ganiu Ayorinde, harped on love and the importance of Ramadan.

He prayed for Asiwaju Bola Tinubu, National Leader of the APC, and Obasa and described those who invite Muslim faithful to break fast with them as blessed.

Group Says Osinbajo Presidency is a Win-Win For APC

CEO of Tesla, Elon Musk Who Startled The World by Cancelling the Plaid+ Again Stunned the World by Rejecting To be on Twitter’s Board.