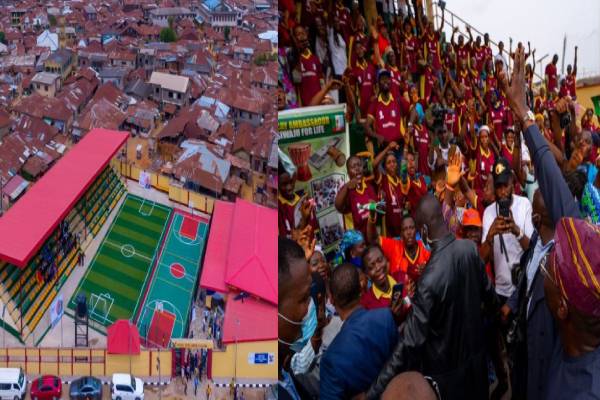 Ikorodu, Lagos on Thursday erupted with palpable excitement as the Governor Babajide Sanwo-olu inaugurated two projects built by his administration for the youth.

Governor Sanwo-Olu kept his promise of constructing a cutting-edge mini stadium and a computerized Youth Centre in the ancient town’s Ita-Elewa neighborhood. 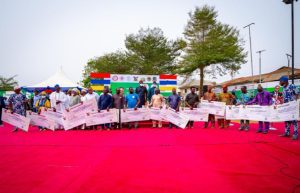 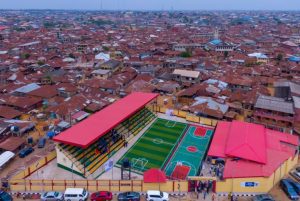 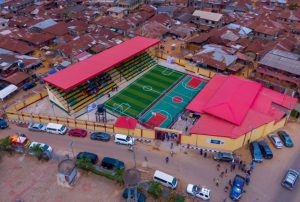 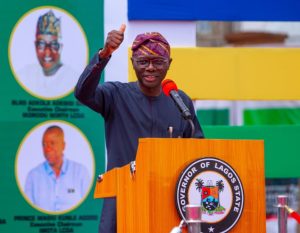 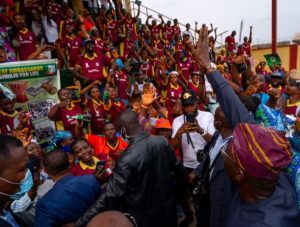 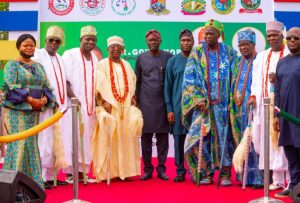 He commissioned both facilities during his working visit to Ikorodu to inspect the State Government’s capital projects throughout the area.

A large crowd gathered at Ikorodu Town Hall, where the Governor and cabinet members met with residents to gather feedback on how the Government’s programs and policies are affecting people’s lives.

The chairmen of the six local councils that make up Ikorodu division, as well as their deputies and councilors, were in attendance. The gathering was also attended by members of the division’s Governance Advisory Council (GAC).

The Sanwo-Olu administration initiated and finished the Youth Centre project, which aims to provide a favorable atmosphere for recreational activities as well as meet the educational and vocational needs of adolescents in Ikorodu.

The State’s Ministry of Youth Development designed the miniature stadium, which includes a semi-standard basketball court. Hon. Jimi Benson, Senior Special Assistant to the President on Sustainable Development Goals (SDGs) and member of the House of Representatives for Ikorodu, contributed to the stadium project by constructing spectator stands and the pitch.

According to Sanwo-Olu, the intervention is being carried out to combat rising social vices and provide a platform for young people to realise their potential in sports, education, and occupational development.

More youth centers are being built in other parts of the state, including Badagry, Orile Agege, Isheri, Epe, and Ikeja, according to the Governor, who stressed that the goal is not to leave young people behind in the government’s development programs.

Construction of the Agric-Isawo-Konu-Arepo Road, Ikorodu Roundabout, Emuren Junction and Parafa Along on the Ikorodu-Imota Road, upgrading of Bola Ahmed Tinubu-Igbogbo-Igbe Road, construction of Oba Sekumade Road, improvement project at Sulaimon Soderu Bypass, and construction of Powerline Road in Akasoleri are among the ongoing projects of the State Government in Ikorodu.

The Governor also reminded Ikorodu residents that the Lagos State Government had set aside monies for the reconstruction of the Odogunyan Expressway, which connects Lagos and Ogun States. He said that the only thing holding up the project was a lack of federal counterpart financing, guaranteeing that road reconstruction would begin as soon as the funds were made available to the contractor.

Sanwo-olu thanked all six council chairmen in the division for their good grassroots representation of the All Progressives Congress (APC), asking them to provide additional projects that would improve the lives of the people.

Other facilities in the mini stadium, according to Commissioner for Youth Development, Hon. Segun Dawodu, include a volleyball court, a table tennis section, a 200-capacity hall, snooker and pool tables, a fully-equipped gymnasium, an ICT Centre with Internet, and a counselling section for wellness and people with drug and mental challenges.

Chairman of Ikorodu Local Government Area, Hon. Wasiu Adesina, acknowledged the Governor’s transformation strides and commitment to physical development of the town, stressing that all challenges being faced by Ikorodu residents were being gradually solved.

The council boss said despite paucity of funds, all councils in the division had complemented the State Government’s efforts in road construction, strengthening of security architecture in the division, and empowerment programmes.

He appealed to the Governor on the upgrade of Odogunyan Industrial Estate and renovation of royal palaces in Imota, Igbogbo, Isiwu, Ipakodo, Ijede and Ibeshe.

Governor Sanwo-Olu gave N500 million in compensation to 74 claimants and worship centers whose structures were demolished to make room for the construction of the Igbe-Igbogbo-Bola Ahmed Tinubu Way, as promised to individuals affected by construction projects in Ikorodu.

NDLEA intercepts millions of opioid caps at Lagos terminal, Others