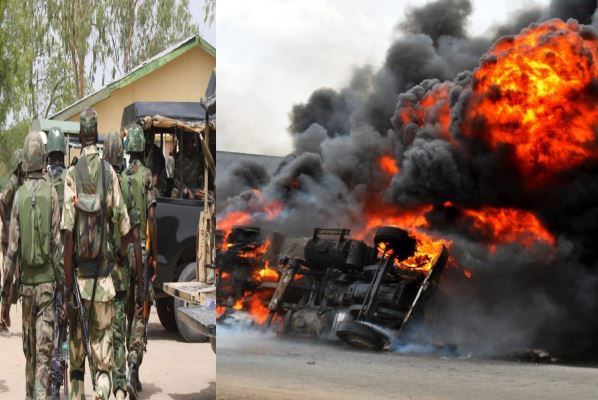 According to reports, soldiers on routine patrol intercepted the vehicles at three sites within the Owaza community in Ukwa West Local Government Area and along the Enugu-Aba-Port Harcourt Expressway.

The vehicles were destroyed, according to military sources, when the drivers abandoned them and fled into the jungle after seeing soldiers on patrol.

“The patrol team from 144 Battalion who were on patrol within their AOR stumbled on a group of persons who were moving illegally refined crude oil from dumpsite on sighting the patrol team, abandoned their vehicle and ran into a nearby bush.

“The six vehicles were intercepted along Enugu-Aba-Port Harcourt Expressway as the drivers had abandoned them to run into the bush.

“The 144 Battalion team also intercepted a white, shy blue Toyota bus loaded with illegally refined product in Owaza, Ukwa West LGA on January 22 during a patrol after the driver on sighting the troop abandoned the vehicle and ran into the bush.

“A white and red coloured Toyota bus loaded with the illegally refined product was intercepted by the patrol team on the same day at about 9:20pm in Owaza, Ukwa West LGA.

“The vehicles were moved to a dumpsite where they were set ablaze by the team as there were no suspects to prosecute along with the intercepted vehicles.”