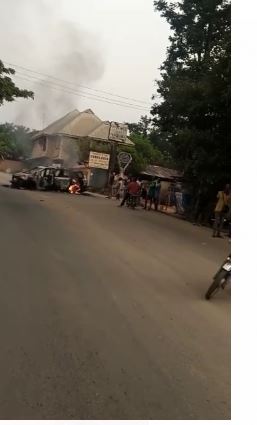 Enugu Sit At Home being Enforced by Hoodlums

Early hours of Monday witnessed a renewed enforcement of the sit-at-home order in the South East, with some hoodlums seen enforcing it’s compliance.

The region has since witnessed relative peace, after the cancellation of the Indigenous People of Biafra (IPOB) sit at home order, although hijacked midway.

Residents of the region were surprised to wake up on Monday morning to record another round of attacks in some cities of the region.

In Anambra state, the hoodlum were reported to have attacked and burnt a Toyota Sienna bus conveying passengers to Lagos at Ekwulobia- Oko roundabout.

Similarly, the Sit-at-home enforcers also extended their operations to the Enugu end of the Enugu-Port Harcourt expressway, burning cars and shooting sporadically.

The latest development caused palpable tension in the region, following a stampede recorded in some cities.

Members of the Indigenous People of Biafra, IPOB had long cancelled the Monday sit-at-home before the Anambra General election.

The exercise which had hitherto crumbled Economic activities in the South East suddenly resurfaced Monday January 10 with shooting and burning cars, motorcycle and Tricycle in Anambra and Enugu states.