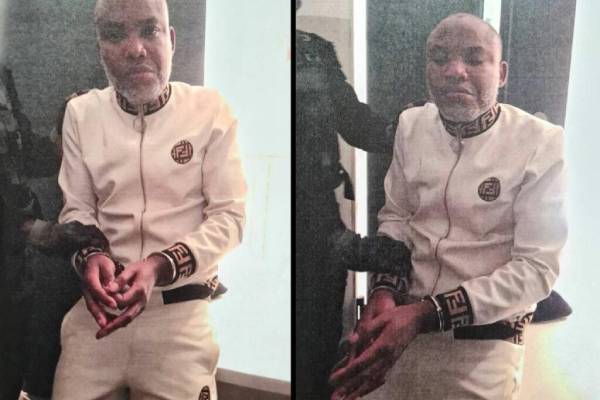 Nnamdi Kanu in Court in Abuja

The Indigenous People of Biafra (IPOB) has urged President Mohammadu Buhari to reconsider his stance on the release of its detained leader, Mazi Nnamdi Kanu.

The group said the Preswident was about making a mistake capable of adversely affecting Nigeria, if he failed to free Kanu.

The President had promised a delegation of Igbo elders of consideration of the IPOB leader’s release which he later rescinded during a TV interview last week.

But in a statement by its Media and Publicity Secretary, Emma Powerful, IPOB accused those it referred to as “foreign-based saboteurs” and enemies of its struggle as being responsible for President Buhari’s change of mind.

It urged the President not to allow himself to be deterred by sacked members of the group peddling fake information about its security outfit, the Eastern Security Network (ESN), for pecuniary interests.

The statement reads in part, “Our attention has been drawn to a comment by President Muhammadu Buhari that he will not release our Leader, Mazi Nnamdi Kanu.

While assuring the capability of Kanu to defend himself in court, the group asked Buhari and his government to be careful and neutral and in the court proceedings.

It added, “Our leader Mazi Nnamdi Kanu and IPOB will defeat them both in local and international courts.

“Buhari and his advisers should reconsider their stance concerning the release of Mazi Nnamdi KANU. They should heed the voice of reason instead of holding an innocent man without any justifiable reason.”

Soun of Ogbomoso will get state burial- Governor Makinde