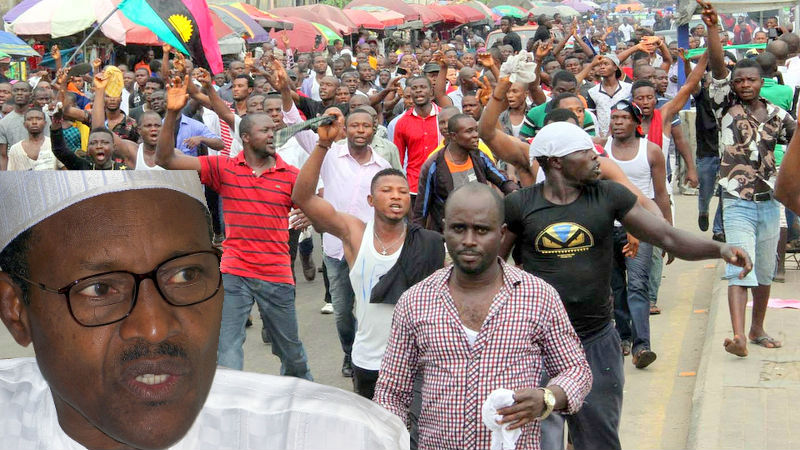 TVC N. Secessionist group, the Indigenous People of Biafra, IPOB, has accused President Muhammadu Buhari of alleged human rights violation and breach of the constitution before and after his swearing-in as a democratically elected president, calling on the National Assembly to invoke and activate section 143 of the constitution to effect his removal.

In a statement issued by its spokespersons, Mr. Emma Nmezu and Dr. Clifford Iroanya, the group warned that without the removal of Buhari, the disintegration of Nigeria into three nations may take a violent path which may end up hurting internal and external stakeholders in Nigeria.

Listing three reasons to justify its call, the group said, “Recall that on the 29th of May 2015, Buhari took Oath of Allegiance and Oath of Office of President which includes non-interference in the discharge of the duties of other arms government. However, he told the world during his Media Chat of December 30, 2015, that Nnamdi Kanu and Sambo Dasuki will never be released and this was after the courts have ordered their unconditional release.

“Buhari’s comment was not only a violation of the Seventh Schedule of the Constitution but it is also in violation of Part-I Section-9 of the Fifth Schedule of the Constitution which states that ‘A public officer shall not do or direct to be done, in abuse of his office, any arbitrary act prejudicial to the rights of any other person knowing that such act is unlawful or contrary to any government policy.”

President Buhari has continued to insist that the unity of Nigeria is not negotiable, urging groups calling for the disintegration of the country to give up such agitation.

He had while hosting corps members in his Daura homestead, specially recognised corps members from the Niger Delta and South-Eastern states serving in Daura, calling on them to, “Tell your colleagues who want Biafra to forget about it,”

But IPOB maintained that the removal of Buhari will ensure a temporary stability for Nigeria as the country prepares for its dissolution into the founding nations of Biafra, Arewa, and Oduduwa.

The statement reads in part, “We, therefore, call on the National Assembly to immediately activate Section-143 of the Constitution of Nigeria to avoid further casualties. The removal of President Buhari using Section-143 of the Constitution will ensure a temporary stability for Nigeria as the country prepares for its dissolution into the founding nations of Biafra, Arewa, and Oduduwa.

“Without the removal of Buhari, according to Section-143 of the Constitution, the unstoppable and irreversible disintegration of Nigeria into the nations above may take a violent and calamitous path which will end up hurting internal and external stakeholders in Nigeria including the economic interests of foreign governments.”