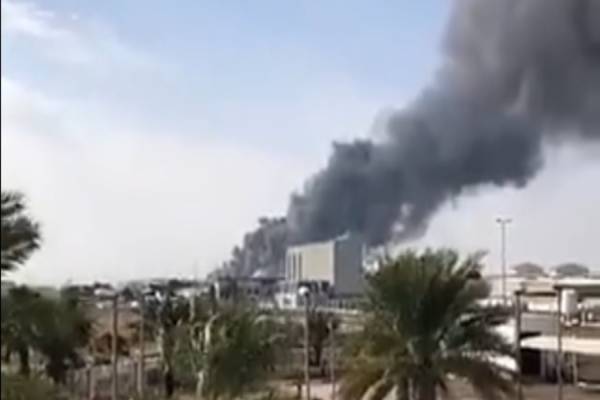 One Pakistani and two Indians were killed, and six other people were injured, the UAE’s official news agency WAM said.
Yemen’s Iranian-backed Houthi rebels said they would soon make a statement about “a special military operation that was carried out in the heart of the UAE,” the Houthi-owned Al Masirah TV channel said Monday.

UAE officials have blamed the Houthis for the incident, and said it “reserves the right to respond,” the Ministry of Foreign Affairs and International Cooperation said in a statement according to state-news agency WAM.

“UAE authorities are dealing transparently and responsibly with the heinous Houthi attack on some civilian facilities in Abu Dhabi,” said Anwar Gargash, diplomatic adviser to the UAE leadership.

Gargash, a former minister of state for foreign affairs, said that the UAE is dealing with the attack and that the “reckless” attempt is too weak to shake the stability of the country.

Deadly attacks are extremely rare in the UAE, long considered an island of stability in a turbulent region. In recent years, Houthi rebels claimed to have launched multiple attacks on the country, but Emirati authorities have denied the allegations.

“Abu Dhabi police confirmed that a fire broke out this morning, which led to the explosion of three petroleum tankers in ICAD 3, Mussafah, near ADNOC’s storage tanks,” a statement said on WAM. “A minor fire also broke out in the new construction area of Abu Dhabi International Airport.”

A CNN journalist heard two explosions with a black plume of smoke rising from the direction of the airport. CNN has also seen a fighter jet — likely belonging to the UAE — circling the area.

The Pakistani Embassy is in contact with UAE authorities after the Pakistani national died after in the incident, its foreign ministry said Monday.

The UAE has been part of a Saudi-led military campaign against the Houthi rebels in Yemen since 2015. In 2019, the United Arab Emirates said it reduced its forces in Yemen as part of a “strategic” redeployment.