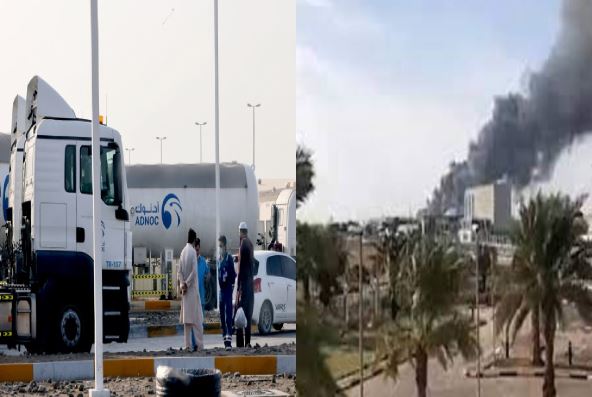 According to Police in Abu Dhabi, the capital of the United Arab Emirates, an explosion that killed three people and injured six others and another fire at an extension of Abu Dhabi International Airport on Monday may have been caused by a suspected drone strike,

Two Indians and one Pakistani were among the fatalities, others had slight to moderate injuries, local authorities said.

Police said an investigation was underway.

Yemen’s Houthi rebels have claimed responsibility for the attack on the UAE without providing further details.

The Houthis, who are backed by Iran, have claimed responsibility for multiple attacks that Emirati officials afterwards denied taking occurred.

The incident comes while Yemen’s yearslong war rages on and as an Emirati-flagged vessel found itself recently captured by the Houthis. That’s as Abu Dhabi largely has withdrawn its national forces from the conflict tearing apart the Arab world’s poorest nation while still supporting local militias there.

Preliminary investigations by Abu Dhabi police revealed the discovery of small flying objects, presumably belonging to drones, that dropped in the two sites and may have caused the explosion and fire. They stated that there was no serious damage as a result of the accidents, but provided no other specifics.

The airport fire was classified by police as “small,” and it occurred at a still-under-construction addition of the international airport. The airport, which is home to Etihad Airways, has been working on its new Midfield Terminal for years, but it’s unclear if that’s where the fire started.

Police said the other blast struck three petroleum transport tankers near a storage facility for the Abu Dhabi National Oil Co. in the Musaffah area. The neighborhood, 22 kilometers (13 miles) from the center of Abu Dhabi city, also has an oil pipeline network and 36 storage tanks, from which transport trucks carry fuel nationwide.

On Monday, Houthi military spokesman Yahia Sarei said the group launched an attack deep in the UAE and said a statement would be released soon.

The location of the ADNOC storage facility where the tankers caught fire is approximately 1,800 kilometers (1,100 miles) northeast of Saada, the Houthis’ stronghold in Yemen.

Since early 2015, the UAE has been at war in Yemen, and was a significant part of the Saudi-led coalition that commenced airstrikes against the Iranian-backed Houthis after they overran Yemen’s capital and deposed the internationally recognized government.