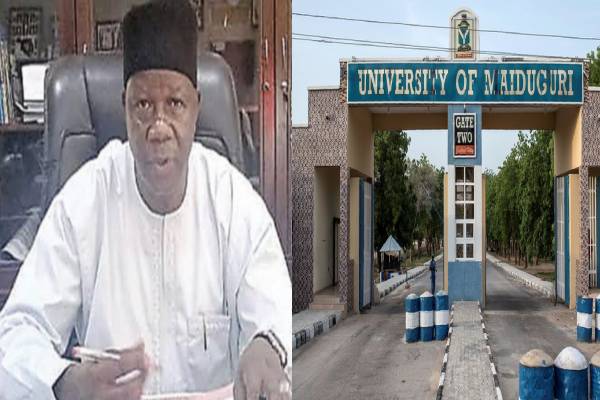 Vice-Chancellor of the University of Maiduguri, Prof. Aliyu Shugaba, has said cultism and sex-for-marks have no place in the institution.

Prof. Shugaba stated this during a conference in Abuja today, Sunday.

According to the vice-chancellor, the institution is stepping up efforts to ensure that cultism and other social vices are effectively addressed.

Despite the fact that the institution has been successful in combating cultism, Shugaba stated that the management was committed to disciplining individuals engaging in illicit activities.

“There was something that happened and it involved one of the military guys on campus, we reported to the military authorities and they took swift action against that officer of theirs.

“That was the only thing that happened on the campus, they were trying to initiate someone and I think the guy has been dismissed from the military; so we do not have much of that problem,’’ Shugaba said.

The vice-chancellor, who bemoaned the high rate of exam misconduct in the educational system, urged pupils to avoid it, warning that defaulters would face severe consequences.

Exam misconduct, he claims, is a problem that is so widespread that it can be found in almost all colleges.

“There is no single exam we conduct that we do not have students that do that kind of thing but when we catch them doing it we have ways of making them realise their mistakes.

“We have always counselled them; we have always embarked on a campaign using bill boards, orientation programmes and the radio station to tell them about the consequences,’’ he said.

Shugaba stated that the university was working with the National Drug Law Enforcement Agency (NDLEA) to combat the threat of drug-related vices.

“We bring the NDLEA to the campus to counsel the students on the effects of drugs.

“So, that has brought it to the barest minimum but our greatest headache is the examination malpractice where every semester we have reported.

“We bring the students before the committee, examine and give them chance to defend themselves and those found guilty depending on the level of the offence will either be expelled or suspended for one or two semesters.

“Because we are doing that it is gradually reducing and in the last two semesters there hasn’t been much cases.

“We have had some that were expelled but if you consider the total number of students on the campus the number expelled is negligible.

“Since we learned about the incidents in other schools, we have been working on our own academic staff to ensure that these things don’t happen,” Shugaba said of sex for grades.

“There are instances where we have invited some that were reported, they have been seriously warned and I can assure you that the situation is now giving way,’’ Shugaba said.