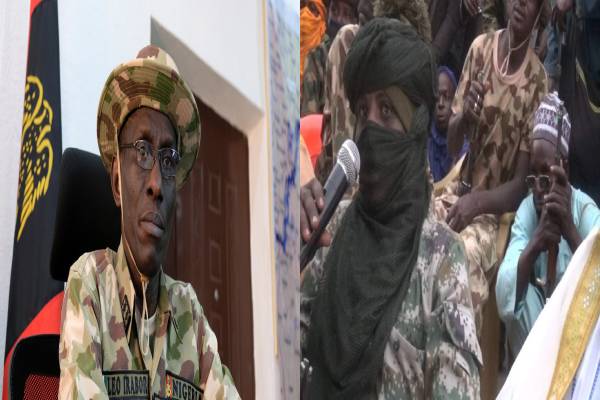 General Lucky Irabor and Bandits Leader, Bello Turji
Suspected armed bandits loyal to the camp of a notorious bandits leader Bello Turji operating within the villages of Isa local government area are under intense fire from a joint military operations.
Several bandits have been allegedly killed by the military in an operation led by the General Officer Commanding of 8th Division Nigeria Army Headquarters Sokoto, Major General Uwem Bassey.
A military source told TVCNEWS that top military officers in the division are all parts of the operation coordinated by the GOC
The source said major military equipment were deplore for the operation and stories from the area of operations indicated that the military is having an upper hand over the marauding bandits.
Satiru and Katanga villages in Isa local government have come under series of bandits attacks including a 2018 attack that claimed the lives of several persons and destruction of property that saw many of the villagers deserting their home giving the bandits a free zone of operation.
Locals within these two villages confirmed to TVCNEWS that the bandits initially resisted the army, and some of them were seen in some of the villages bragging and boosting about their ability to fight back.
The local source says between Thursday and Friday, the bandits suffered heavy casualties and many of them who survived are seen running away outside Bafarawa village on their motorcycles.
Attempt to speak to army public relations officer in the division was unsuccessful as the officer in charge is not responding to call put through his mobile line.
Also effort was made to speak with the Information officer of the local government, but his mobile device is not connecting.
When contacted the Sokoto state Police Command Public Relations Officer Assistant Superintendent of Police Sanusi Abubakar promised to contact the Police Divisional Officer of Isa local government are get back to TVCNEWS, is yet to do that as at the time of filing this report.