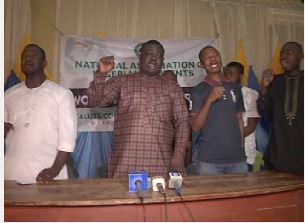 The Public Relations officer of the National Association of Nigerians Students made this known while speaking about the state of things in the
country’s tertiary institutions. TVC News Kazeem Olowe reports that it has been stated that until those handling the affairs of the country believe in the nation’s public tertiary institutions and allow their children to attend public universities, Polytechnics and Colleges of Education in the country, the level of tertiary Education in Nigeria may not improve.

The Public Relations officer of the National Association of Nigeria students Azeez Adeyemi made this known while Speaking on the state of
things in the country’s public tertiary institutions.

He identified decay infrastructure, poor welfare and lack of support for researchers as some of the problems confronting tertiary institutions in
the country.

On his part, a senior lecturer and Chairman of the Academic Staff Union of Polytechnics in Moshood Abiola Polytechnic, Abeokuta said government is
not investing much into the sector as expected across the country.

They believed that the country is blessed with intelligent people but many of them are leaving the country to work abroad due to lack of good welfare
and conducive atmosphere for learning.

They concluded that the tertiary education system in Nigeria is not there yet but can continue to make positive impacts if government provides the
much needed support.