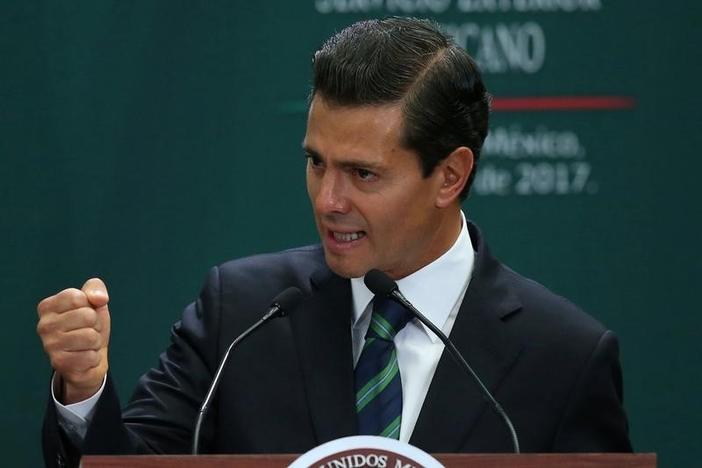 TVC E. U.S. actor and UN Messenger of Peace Leonardo DiCaprio poses during arrivals for a screening of his documentary film ‘Before the Flood’ at the United Nations in New York City, U.S. October 20, 2016.

Mexico’s President Enrique Pena Nieto wrote toLeonardo DiCaprio on Twitter on Thursday in a bid to reassure the Hollywood actor his government was taking steps to protect a rare porpoise in Mexican waters teetering on the brink of extinction.

Populations of the vaquita, a tiny snub-nosed porpoise that lives in the Gulf of California, have dropped sharply in recent years because of gillnet fishing for shrimp and totoaba, a popular delicacy in Asia, sparking increased international concern.

On Wednesday, DiCaprio called on his 17.5 millionTwitter followers to get behind a World Wildlife Fund campaign online, which urged people to petition the Mexican president to “take strong action now” to save the vaquita.

On Thursday evening, Pena Nieto took to Twitter in English to defend his government’s efforts on behalf of the vaquita, addressing the actor directly with his first tweet.

“I welcome @LeoDiCaprio and @World_Wildlife’sconcern regarding the Vaquita Marina,” Pena Nieto wrote. “@Mexico has focused all its efforts to prevent the extinction of this species,” he said before sending out five more tweets, all in English, to draw attention to what Mexico is doing.

Mexico imposed a two-year ban on gillnet fishing in thevaquita’s habitat in 2015, extending it earlier this year. Critics have complained the ban needs better enforcement.

Viva Vaquita, a group dedicated to saving the porpoise, says on its website that the vaquita population was estimated to be less than 50 in January 2017, based on earlier study findings.

Chairman of the electoral commission, Professor Mahmood Yakubu has met with the national security adviser where he held talks on...

The Central Bank of Nigeria has advised Nigerian to embrace practicing more of cashless transactions as it is the global...