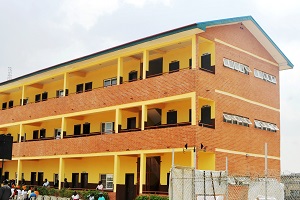 The Lagos state government says about 11.6 billion naira was expended on the rehabilitation and construction of some public primary and secondary schools in the state.

Deputy governor Idiat adebule said this during a press briefing to mark two years in office of Governor Akinwunmi Ambode.

TVC News Kareemot Salami reports that annually, ministries in Lagos state usually set a day aside to evaluate and also give account of their stewardship.

Talking about the achievements and challenges facing the education ministry in Lagos state, deputy governor Idiat Adebule who presides over the ministry said about forty senior secondary schools were provided with well equipped laboratory furniture and equipment by the administration.

Adebule said the sum of N555 million was paid as exam fees for 44, 968 students who sat for the 2017 West African School Certificate Examinations (WAEC) in the state.

This is in fulfillment of the state government’s promise to lessen the burden of parents in the academic pursuit of their children and wards.

On discipline in schools, Adebule said a teacher was dismissed while three others were sanctioned in 2016 for various acts of misconduct.

She urged parents and guardians to monitor the activities and progress of their children and wards to prevent them from putting up lawless attitudes in schools.

Also speaking, Special Adviser on Education, Obafela Bank-Olemoh said over the past one year the education ministry had made remarkable achievements through various novel programmes like code Lagos, ready.set.work, Eko nkeko (Lagos is learning), project 350, adopt a library, educate Lagos. com amongst others.

He said a total of 11, 492 residents enrolled at the state’s adult learning centres across the the state in the last one year.

According to the ministry, all the programmes are being carried out to accommodate the growing population of the state as well as provide a conducive teaching and learning environment in public schools.