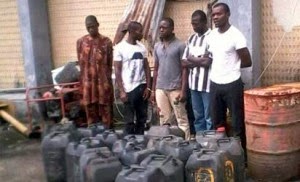 Pipeline vandals in Lagos state are facing tough times in the ongoing military push to completely halt the criminal activities.

According to the Lagos state government’s State Emergency Agency, logistic support is being provided for the Nigerian Navy and the Army to carry out the last phase of cleansing the creeks of oil thieves.

Over fifty three thousand empty 50 litres jerry cans were recovered by the Nigerian Navy during the Operation.

The jerry cans are believed to have been used in stealing petrol after a major oil pipeline is vandalised.

The joint military operation was in the creeks of Ikorodu at Ishawo community and other areas notorious for pipeline vandalism.

LASEMA’s Swan Boogies were used to ferry out the empty jerry cans from the creeks and the Navy also warned against any illegal activity that will halt the flow of crude oil.