Trump offers condolences to Theresa May after London attack

Trump offers condolences to Theresa May after London attack 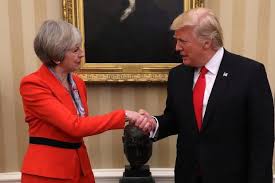 U.S. President Donald Trump sent a tweet on Wednesday evening saying he had contacted British Prime Minister Theresa May, following an attack in London which left five people killed and about 40 injured when a car plowed into pedestrians and a suspected Islamist-inspired attacker stabbed a policeman close to Britain’s parliament.

Prime Minister Theresa May condemned the attack as “sick and depraved.”

Meanwhile, Prime Minister Theresa May has condemned the terror attack in London. She praised the efforts of security services and has vowed to move forward saying the country will never give in to terror.

“Once again today, these exceptional men and women ran towards danger even as they encouraged others to move the other way. On behalf of the whole country I want to pay tribute to them and to all our emergency services for all they are doing to reassure the public and bring security back to the streets of our capital city. That they have lost one of their own in today’s attack, only makes their calmness and professionalism under pressure all the more remarkable.”

“The location of this attack was no accident the terrorist chose to strike at the heart of our capital city where people of all nationalities, religions and cultures come together to celebrate the values of liberty democracy and freedom of speech. But let me make it clear today as I have had calls to do before, any attempt to defeat those values through violence and terror is doomed for failure,” May said.

The latest attack took place on the first anniversary of attacks by Islamist militants that killed 32 people in Brussels.