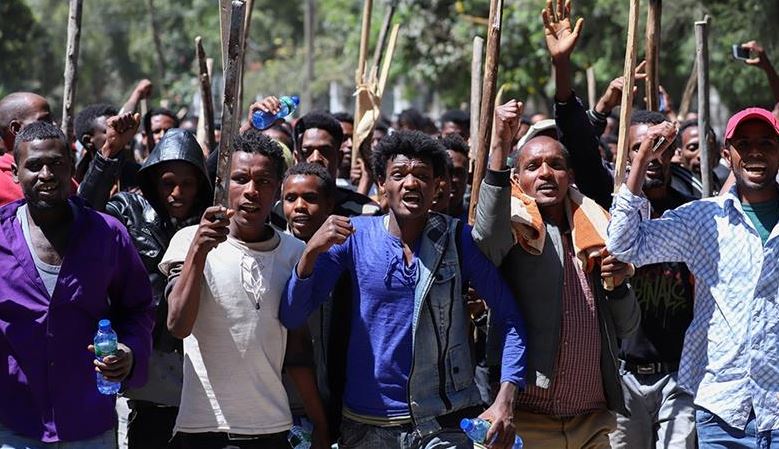 Ethiopia activist calls for calm after 16 killed in clashes

Ethiopia activist calls for calm after 16 killed in clashes

Prominent Ethiopian activist Jawar Mohammed called for calm on Thursday amid protests that have killed 16 people and are challenging Nobel Prize-winning Prime Minister Abiy Ahmed in his political heartland.

Addressing hundreds of his supporters who have set up camp around his house in Addis Ababa, Jawar said: “Open the blocked roads, clean the towns of barricades, treat those who have been injured during the protests and reconcile with those you have quarrelled with.”

People have been killed in at least four cities since clashes broke out Wednesday, officials and a witness said, after police fired gunshots and teargas to break up demonstrations in support of Jawar.

A media entrepreneur and activist from the Oromo ethnic group, the country’s largest, Jawar organised protests that propelled Abiy to power last year.

But the greater freedoms have unleashed long-repressed tensions between Ethiopia’s many ethnic groups as local politicians claim more resources, power and land for their own regions. This week Abiy accused unnamed media figures of promoting ethnic interests over national unity.

Jawar, a one-time ally of the prime minister, has mobilised protesters from the Oromo ethnic group – the same group Abiy comes from. The showdown is a litmus test for Abiy: if he backs down, it could embolden Jawar and other regional powerbrokers. But widespread violence would tarnish his reformist credentials.

A spokeswoman for the prime minister did not respond to requests for comment.

Late on Tuesday night, police had surrounded Jawar’s house and told his bodyguard to leave, he told Reuters. Hundreds of people quickly gathered in support. Protests spread to other parts of the capital and other cities, where police fired teargas and bullets to disperse them.