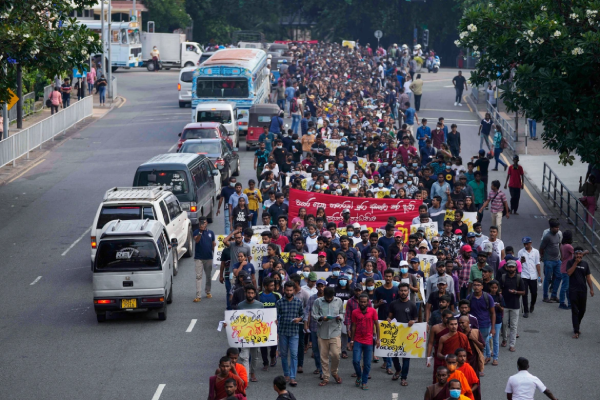 Thousands of students from state universities have protested in Colombo, the capital of Sri Lanka, calling for the resignation of the president and prime minister as a result of the country’s economic crisis, which they say have disrupted people’s lives and education while also causing severe shortages of basic necessities.

The students claim President Gotabaya Rajapaksa is to blame for the country’s greatest economic crisis since independence in 1948, and that Prime Minister Ranil Wickremesinghe, who assumed office a little more than a month ago pledging to address shortages, has failed to keep his promise

Sri Lanka has suspended payment on the $7 billion in foreign debt that was due this year due to its approaching insolvency. It must also repay more than $5 billion every year through 2026. Since its foreign reserves are practically exhausted, it is unable to import food, fuel, cooking gas, and medicines. Lack of fuel for power plants causes prolonged daily power outages.

People have had to wait in long queues to buy petrol and fuel in recent months, and the nation has primarily lived on credit lines given by its neighbor India to buy fuel and other necessities.

Representatives from the International Monetary Fund are currently in Sri Lanka to discuss a bailout proposal.