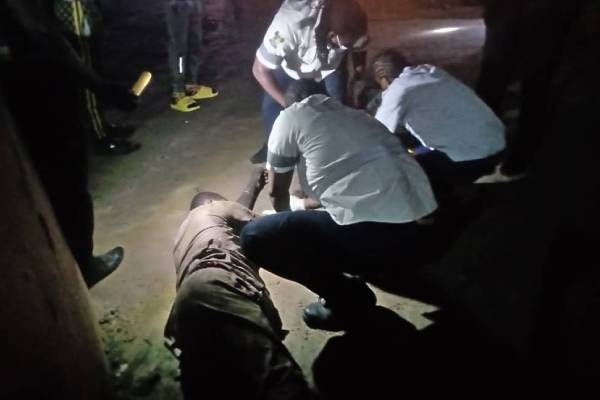 One of the victims being attended to by Emergency Workers

The Lagos State Emergency Management Agency, LASEMA rescued seven passengers and recovered one dead adult male that was killed in the Alapere road accident which occurred earlier this morning.

The incident which was relayed to LASEMA through the Toll Free 112 Emergency Number at 03:10a.m this morning, occured when a J5 Bus occupied by passengers as well as onions, rammed into a trailer conveying ply woods that was exiting a company.
The injured victims, mainly made up of passengers from the J5 Bus, were promptly tended by the Agency’s medical team which gave them Pre-hospital care treatment, supported by LASAMBUS, before they were quickly conveyed to the Trauma Center domiciled within the GbagadaG eneral, for further treatment.
Preliminary Report from Office of the Permanent Secretary LASEMA, Dr.Olufemi Damilola Oke-Osanyitolu has it that, “On getting to scene of the incident, it was discovered that a trailer with registration number SD- 325 XY conveying ply woods and a J5 Bus with registration KRD 882 EU loaded with Onions were involved in an accident.
“Further information gathered revealed that the J5 Bus, due to reckless driving, ran into the triller which was coming out of a company.
“Unfortunately an adult male who got trapped under the trailer lost his life while, about seven others (occupants of the Bus), were injured.

“The injured victims were treated by the Agency’s medical team and the LASAMBUS before being taken to the Trauma Center for further treatment.
“The trapped victim (dead) has been recovered, bagged and handed over to the family at the incident scene, while the affected trailer has been recovered with the aid of the agency’s heavy duty equipment (‘Goliath’ giant forklift) and taken to the LASTMA Yard with the aid of the Agency’s heavy duty tow truck ‘the Super metro’.
“The affected bus was also recovered off the road to a lay-by with the aid of the agency’s light tow truck, and thereafter, it was handed over to officials of the Nigerian Police Force.